'We run this country,' Karzai says of Afghan people 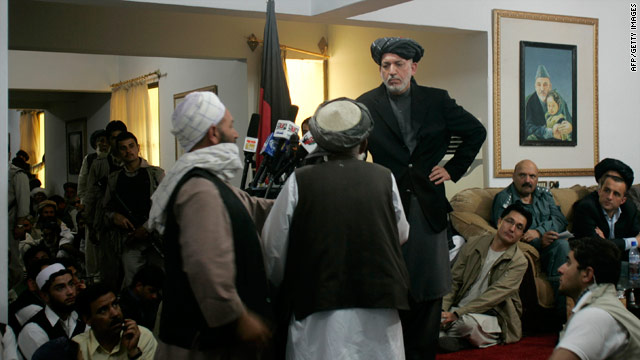 Kandahar, Afghanistan (CNN) -- Plans to drive the Taliban from Afghanistan's second-largest city and surrounding districts will start only when the plans have the support of the population, Afghan President Hamid Karzai said Monday.

Karzai has told tribal leaders in the Kandahar region, the Taliban's traditional stronghold, that he would hold back the NATO offensive until he had their backing. His insistence on that support drew a fresh expression of frustration from the White House on Monday, but Karzai told CNN, "We run this country," referring to the Afghan people.

Karzai has led Afghanistan since the U.S.-led invasion that drove the Taliban from power in December 2001. He was re-elected last year in a vote that international observers said was marred by fraud, and Karzai irritated the Obama administration Friday when he blamed the irregularities on foreigners who wanted a "puppet government" in Afghanistan.

He further aggravated Washington, his biggest backer, on Sunday when he told a gathering of tribal leaders that the U.S.-led alliance would not move against Taliban fighters in Kandahar "until you say we can." White House spokesman Robert Gibbs told reporters Monday that Karzai's remarks were "genuinely troubling."

"It was disturbing Friday," Gibbs said Monday. "Obviously, it didn't get better. ... On behalf of the American people, we're frustrated by the remarks." Asked whether the administration has confidence in Karzai, Gibbs said, "President Karzai is the elected leader of Afghanistan."

Karzai told CNN on Monday that his remarks should not have hurt his government's relationships with its allies. "It's just to make sure that we all understand as to where each one of us stands," he said.

"Afghanistan is the home of Afghans, and we own this place," he said. "Our partners are here to help, and we run this country."

The Obama administration has poured about 30,000 additional U.S. troops into Afghanistan since December, bringing the number of American troops to about 100,000. An additional 40,000-plus NATO troops are also in the conflict.

Allied and Afghan troops recently retook the southern city of Marjah from the Taliban and have been expected to move on the Kandahar region in June. But at Sunday's meeting, in which Karzai was accompanied by Gen. Stanley McChrystal, the U.S. commander in Afghanistan, most of the Afghan leaders were apprehensive about the operation.

Gibbs said a planned White House visit by Karzai, scheduled for May, was still on "as of now." And McChrystal told CNN his partnership with Karzai "has been something I've been pleased with and something I've relied on as we've moved forward in operations, and that's reflected in his people and his government that I've worked with."