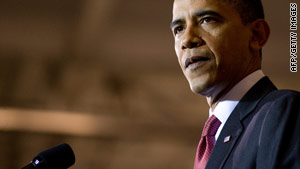 President Obama's nuclear strategy has been criticized by Republicans as too weak.
STORY HIGHLIGHTS

(CNN) -- President Obama hosts leaders from 46 countries for a two-day nuclear security summit starting Monday that will focus on how to better safeguard weapons materials, both old and new, to keep them out of the hands of terrorists.

The gathering at the Walter E. Washington Convention Center in the nation's capital is considered an unprecedented effort to rally global action on securing vulnerable nuclear materials.

It also is the centerpiece of a major Obama objective aimed at preventing the spread of nuclear weapons and technology.

As the summit begins, the United States is negotiating with the four other permanent members of the United Nations Security Council on tougher sanctions against Iran over its nuclear ambitions.

"The central focus of this nuclear summit is the fact that the single biggest threat to U.S. security, both short term, medium term and long term, would be the possibility of a terrorist organization obtaining a nuclear weapon," Obama said Sunday, appearing with South African President Jacob Zuma in Washington.

"This is something that could change the security landscape in this country and around the world for years to come," Obama said. "If there was ever a detonation in New York City, or London, or Johannesburg, the ramifications -- economically, politically and from a security perspective -- would be devastating. We know that organizations like al Qaeda are in the process of trying to secure nuclear weapons or other weapons of mass destruction and would have no compunction at using them."

Obama signed a new treaty with Russia last week to reduce the nuclear stockpiles of both nations, and his administration issued a revised U.S. nuclear arms strategy intended to reinforce the nation's nuclear deterrent while isolating terrorists and rogue states that fail to comply with international regulations.

It all fits together as an ambitious effort to mobilize a unified global effort against nuclear proliferation, Secretary of State Hillary Clinton and Defense Secretary Robert Gates said in interviews broadcast Sunday.

"We want to get the world's attention focused where we think it needs to be, with these continuing efforts by al Qaeda and others to get just enough nuclear material to cause terrible havoc, destruction, and loss of life somewhere in the world," Clinton told the ABC program "This Week."

Of particular concern are older nuclear weapons and materials that aren't safeguarded as well as they should be, particularly in Russia and other states of the former Soviet Union, Clinton said on the NBC program "Meet the Press."

It used to be considered a U.S.-Soviet issue, Clinton said, rather than the high international priority "we intend to make it in the coming week."

"Unfortunately, we have a situation in which there is a lot of loose nuclear material around the world," Obama said Sunday. "And so the central focus of this summit is getting the international community on a path in which we are locking down that nuclear material in a very specific time frame, with a specific work plan."

South Africa, he said, is a moral leader on the nuclear issue, since it began and then dismantled a nuclear program.

The summit's goal is to get an agreement and working plan on how each of the participating countries will control nuclear materials or otherwise prevent their spread, Clinton said on the CBS program "Face the Nation."

Obama's nuclear strategy has been criticized by Republicans as too weak in the face of threats and defiance by Iran and North Korea.

"While the treaty [with Russia] may be in the right direction and the nuclear summit that's coming to town may be an impressive group of people, the nuclear posture statement that the president put out is troublesome to me," Republican Sen. Lamar Alexander of Tennessee said on the "Fox News Sunday" program. " I mean, it takes away the ambiguity about our use of nuclear power. Ambiguity in foreign policy is sometimes very useful."

Khamenei made the remarks Sunday in a meeting with the Armed Forces chief of staff and other top military officials, according to IRNA. According to the news agency, Khamenei said Obama had recently threatened Iran with nuclear weapons and called for Iran's military to prepare itself.

Khamenei apparently was referring to last week's announced shift in U.S. nuclear strategy, in which the administration said it would swear off developing new generations of nuclear weapons and would not use its existing arsenal to attack non-nuclear states that are in compliance with nonproliferation agreements.

Gates made clear Sunday that the new policy left Iran vulnerable to a U.S. nuclear attack because Iran refuses to comply with nonproliferation agreements.

"All options are on the table" regarding Iran and North Korea, which also defies international regulations, Gates said on the CBS program.

Now, with the U.N. negotiations on tougher sanctions, "the Iranians have been beating down the doors of every country in the world to try to avoid" a new sanctions resolution, Clinton said.

However, when asked whether Iran had the capability now to develop a nuclear weapon, Clinton avoided a direct answer, saying it was unclear.

Gates had no hesitation, declaring immediately that "it's our judgment here they are not nuclear capable."

"We're doing everything we can to try and keep Iran from developing nuclear weapons," Gates said, adding that there probably would be another Security Council resolution with tougher sanctions on Iran.

He called such a resolution important on its own and as a legal platform for others to take their own steps.

"At the end of the day, Iran has to decide that not having nuclear weapons is a better defense strategy than having them," Gates said.