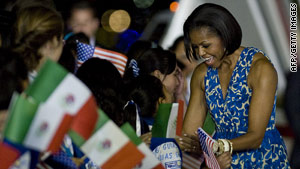 Obama, fresh off an unannounced stop in Haiti, was greeted Tuesday night at Benito Juarez International Airport by Carlos Pascual, the U.S. ambassador to Mexico; and Arturo Sarukhan, the Mexican ambassador to the United States.

The White House says the three-day visit is taking place "in recognition of the deep ties between the United States and Mexico."

Other events on her itinerary include a tour of the Museo Nacional de Antropologia (National Museum of Anthropology) and a public elementary school that serves low-income students.

The first lady also will give a speech Wednesday at the Universidad Iberoamericana and will attend a reception with women leaders at Los Pinos and a dinner hosted by Mexican President Felipe Calderon and his wife.

Before leaving Thursday, Obama is scheduled to hold a breakfast for young Mexican leaders and visit the U.S. Embassy in Mexico City.

In January, about a week before he was sworn in, President Obama met with Calderon in Washington. The meeting at the Mexican Cultural Institute fulfilled a tradition in effect since 1980 of U.S. presidents talking with their Mexican counterparts before being sworn in to underscore the special relationship between the two nations.

"It's powerful. The devastation is definitely powerful," Obama said after the tour.

The magnitude-7.0 earthquake on January 12 demolished large swaths of Port-au-Prince and left more than 1 million people homeless. Many are still living in tents and underneath tarps.

The U.S. delegation made the visit "to underscore to the Haitian people and the Haitian government the enduring U.S. commitment to help Haiti recover and rebuild, especially as we enter the rainy and hurricane seasons, and to thank the women and men across the whole of the U.S. government for their extraordinary efforts in Haiti during the past three months," the White House said in a statement.

Obama and Biden "will also reach out to the U.N. and international relief communities in recognition of the truly global effort under way to help Haiti," the White House said.