Experts: Angry rhetoric protected, but can be disturbing 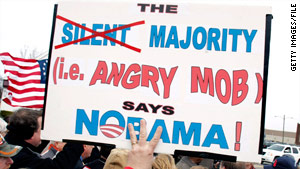 Experts say that as anger heightens, fringe messages are crossing into the mainstream.

(CNN) -- Letting disgruntled citizens vent is important to national security, experts say, but some messages emanating from angry Americans in recent weeks have pressed the boundaries of free speech.

Politicians have reported slurs as well as threatening letters and phone calls. Congressmen have reported vandalism to their offices. One said he was spit on. Another said his brother's gas line was cut after a Tea Party member posted his address online.

Tea Party leaders denounce the threats and deny involvement, pointing to fringe elements -- not Tea Party members, per se, but groups with degrees of overlapping ideologies.

But the angry rhetoric is not isolated to fringe groups. Both mainstream liberal and conservative camps have joined the chorus, and while some of the language sounds threatening, most of it is protected.

As the Tea Party held its April 15 tax day protest against government spending, related groups were planning an April 19 protest at Fort Hunt National Park near Alexandria, Virginia. The purpose of the latter, the groups say, is to "restore the Constitution," and the location was chosen because it is the nearest point to Washington where firearms can be carried openly.

Outside a few rogue comments from visitors, Tea Party Web sites focus on education, news and organizing protests of a government the group sees as out of control. Peruse fringe Web sites, though, and you'll hear a darker, conspiratorial tone: President Obama isn't American; the U.S. and/or Israel perpetrated 9/11; the government is constructing concentration camps; or foreign troops will populate U.S. soil when an amorphous New World Order takes over.

A recent report from the Southern Poverty Law Center says Patriot groups -- which the center defines as "militias and other extremist organizations that see the federal government as their enemy" -- are on the rise, and it loosely lumps in Tea Party organizations with the hate groups.

"The 'tea parties' and similar groups that have sprung up in recent months cannot fairly be considered extremist groups, but they are shot through with rich veins of radical ideas, conspiracy theories and racism," it said.

Carol Swain, a Vanderbilt University law and political science professor, derided the report as another attempt to draw spurious links between the Tea Party and radical elements of the right. Those committing violent acts against congressmen no more represent the Tea Party than suicide bombers represent Islam, she said.

"We are seeing the beginning of a social movement that's coming about because of widespread grievances with government," she said. "I believe that these are just ordinary people that are fed up with the Democratic and Republican parties."

It's a familiar scene on the political landscape: Christians, Muslims, unions, gun owners, environmentalists, seniors, conservatives and liberals help compose the gamut of voices clamoring to be heard in Washington. Experts say it's best to let everyone have their say.

"When you drive dissent underground, it's bound to bubble up somewhere, usually with violence," said Robert Richards, a founding director for Penn State University's Pennsylvania Center for the First Amendment.

The 1950s brought us McCarthyism, the 1960s brought civil rights, and the 1970s delivered the Vietnam War -- all issues that stoked anger and protest in the United States. During those same eras, Richards said, the Supreme Court was tackling a slew of cases that defended the rights of people and the press to criticize the government.

Today, after decades of relatively unfettered free speech, you still see anger and demonstrations, but the violent element is not nearly as constant.

Rallies in the capital
Tax Day Tea Party -- The Tea Party Express kicked off in Searchlight, Nevada, hometown of Senate Majority Leader Harry Reid, whom Tea Party members accuse of corruption and lying. Forty-six stops later, the express pulled into Washington, D.C., on April 15 for its Tax Day Tea Party. With "Regroup. Rebuild. Reclaim." as their mantra, group members gathered at the Capitol and on the National Mall to protest what they say is an overgrown government with a penchant for rampant spending.

Restore the Constitution Open-Carry Rally -- Several organizations, including some the Southern Poverty Law Center says are hate groups, will gather at Fort Hunt National Park on April 19, the anniversary of the first battles of the American Revolution, of the end of the Branch Davidian siege in Waco, Texas, and of the Oklahoma City bombing. The organizations say they are fed up with corrupt politicians and want to "unite as many as will come to the edge of Washington, D.C., to rally in support and defense of the Constitution ... and to stand, armed and united, with our brothers and sisters delivering the same basic message to our servant politicians in D.C. and in the state capitals."

"There's less reason to erupt in some type of violence because you can get your message out there in other ways, other more appropriate ways," Richards said.

Dr. Jerrold Post, a George Washington University political psychology professor who spent 21 years with the CIA, said that in nations where free speech is snuffed, such as Yemen and Pakistan, domestic terrorism is more prevalent.

"Free speech relieves the pressure of discontent in some ways," said Post, who founded the CIA's Center for the Analysis of Personality and Political Behavior.

Post said he is concerned, however, about messages coming from the conservative base. Last month, GOP chief Michael Steele called for House Speaker Nancy Pelosi to be put on "the firing line," and House Minority Leader John Boehner said that a congressman "might be a dead man" because of his health care vote.

"I find some of this rhetoric recently -- 'reload' -- quite scary," Post said of a Twitter post by Sarah Palin directing followers to her Facebook page, which had crosshairs on the districts of 20 congressmen who voted for the controversial health care bill. "Some people are going to hear that as, 'Take up your arms.' "

"The righteous rage then becomes not just a rationalization for threatening rhetoric, but it has the potential of moving people to action," he said.

Therein lies the paradox for a country like the United States, where free speech is guaranteed. It's healthy to allow groups to vent, experts say, but not to the point that they incite violence.

The FBI says letters sent to 30 governors, cryptically demanding they step down or be removed, don't appear to pose threats. And of all the threats against congressmen, authorities have arrested only three men, whom they charged with threatening Rep. Eric Cantor, R-Virginia, Sen. Patty Murray, D-Washington, and Pelosi.

Political speech, Richards explained, commands extra protection because it is often bitter and inexact, he said.

"We don't need the First Amendment to protect popular or majority viewpoints," he said.

The ongoing case against Internet shock jock Hal Turner demonstrates the complications of regulating speech, Richards said. No stranger to charges of advocating violence, Turner was arrested after writing that three federal judges "deserve to die" and that "their blood will replenish the tree of liberty." No harm came to the judges.

Hung juries twice yielded mistrials. Charged with threatening to murder the judges, Turner is scheduled to face another trial this month.

Turner's is one of many cases demonstrating that while it's illegal to incite or exact violence, it's often OK to talk about it, Richards said.

Extreme rhetoric is not merely a product of conservative voices, however.

Steven Best, a philosophy professor at the University of Texas-El Paso, is accustomed to straddling the line between talk and action. As press officer for the Animal Liberation Front, which the U.S. considers a terrorist outfit, Best disseminates the leftist group's news releases, but he has never engaged in criminal activity, he said.

Anger gets a bad rap, but anger is the beginning of action, but you can't let it eat you up.
--Steven Best of the North American Animal Liberation Press Office
RELATED TOPICS

He defends ALF's attacks on farms, corporations and animal laboratories, and he likened the group's civil defiance to that of the colonists staging the Boston Tea Party.

"There are forms of violence and resistance and brick throwing that are legit, and some that are not," Best said. "I'm trying to throw the right brick through the right window for the right cause."

Outside of a distrust of government and aversions to corporate bailouts, ALF and the Tea Party have little in common, Best noted, adding there is something to be said for the current manifestation of the populist movement.

"There's something about them I can almost admire," he said. "We're taught to tolerate things, and we're too passive. I'll give them that; they're getting off their asses.

"I think we could learn how to be angry, how to take action, how to get mobilized."

Richards said he believes groups must temper their anger for a marketplace of ideas to emerge, but society's polarization is "ratcheting the rhetoric up to a fever pitch."

"They need to stop shouting and put their ideas out there in a more cogent fashion," he said.

Best contended that fiery talk has its place.

"Anger gets a bad rap, but anger is the beginning of action," he said, "but you can't let it eat you up."

Post speculated that today's anger stems from a feeling of "groundlessness." The face of politics is changing, whether it's a black president, female secretary of state or gay, Jewish liberal as one of the most visible figures in Congress. Priorities are changing, too, as gay marriage, immigration, health care and drug legalization are among the most heated debates of late.

Some may perceive that their values are under assault or "feel bypassed by an inability to cope with a rapidly changing world," Post said.

In times of societal distress -- be it a struggling economy or profound ideological disparities -- knowing your enemy is comforting, especially when you can blame "them" rather than "us," he said.

America has blamed Reds, Islamists, illegal immigrants and the "axis of evil." The left has blamed the right. The right has blamed the left. Today, the Tea Party's "them" is a perceived "soft center in Washington who doesn't understand," Post said, and it helps to have "an external target to blame."

"It makes sense of the senseless in his life," Post said. "There is a deep-seated need in human psychology for enemies. We define ourselves by what they are not. We end where they begin."