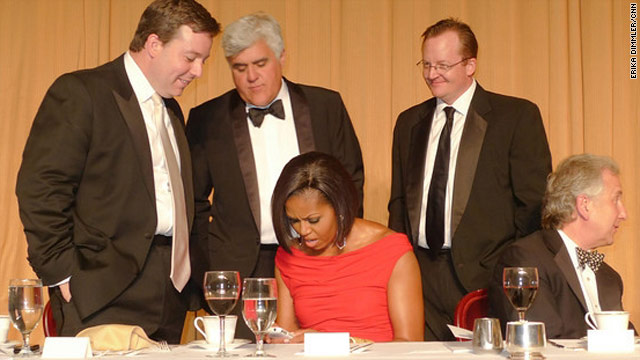 Washington (CNN) -- It was my first chance to spend some quality time at dinner with First Lady Michelle Obama, so I decided to do what my pal Ali Velshi would probably do in the same situation: get her hooked on Twitter.

I was sitting with the first lady and Jay Leno at the head table for Saturday night's White House Correspondents Association Dinner because I'm a member of the association's board, a front-row seat to the slew of celebrities who walked up to gawk at Mrs. Obama and the president, who was a few seats from me.

Teen sensation Justin Beiber, famous-for-being-famous Kim Kardashian, comedian Chevy Chase and actor Morgan Freeman all walked up to the rope line separating the head table from the rest of the ballroom to send the first couple a shout-out.

I was snapping pics of the celebrity parade on my iPhone and posting them to my Twitter account, @edhenrycnn, during dessert, just a few minutes before the president and Leno would take their turns at telling some jokes.

Leno, a social media skeptic, finally turned to me with squinted eyes and said in a conspiratorial tone, "Are you tweeting right now?"

I confessed to Leno that I was, sparking Mrs. Obama to ask me whether journalists find value in social media or whether it's mostly trivial. I said I find it helpful to get feedback, good and bad, from people who follow my tweets.

When Mrs. Obama mentioned that she had never tweeted, I noted that the president had sent out his first tweet a few months ago from a Red Cross account to promote relief to Haiti and wondered aloud: "Why don't you send out your first tweet on my iPhone?"

The first lady laughed and said her press staff wouldn't be happy if she went rogue like that. Besides, she said, White House Press Secretary Robert Gibbs would have to sign off first.

Noting that Gibbs was sitting at the other end of the head table, I stood and told the first lady I'd ask him.

To my surprise, Gibbs instantly told me it was a fun idea, on one condition: I had to first send out a tweet saying he had endorsed it, so that colleagues on Mrs. Obama's staff were not blindsided.

I typed out a tweet saying, "i am trying to coax First Lady to do her first ever tweet. Gibbs @presssec just gave his blessing."

Then I walked back to Mrs. Obama to tell her the good news. But she told me good-naturedly, "Gibbs did not say that; you're lying!" I assured the first lady I would not tell her a fib, which prompted Leno to jump to his feet to say he'd go get Gibbs to sort this out once and for all.

A laughing Gibbs came over and advised the first lady it would be a harmless exercise, but she was skeptical until the commander in chief finally weighed in.

Hearing the light-hearted argument playing out a few seats down, the president asked, "What's going on?"

The first lady explained her dilemma, but the president waved his hand as if to say "no big deal" and told her to go for it.

I handed the first lady my iPhone, but it quickly became apparent that she had very little experiences with this smartphone. Like many people, she said, "How do you type on this?"

Gibbs, who was looking over our shoulders, suggested that I type it out, so I told Mrs. Obama to start dictating the note. I started my typing "from flotus," as in "first lady of the United States."

She joked about the pressure of coming up with something interesting to say. She started simply with how she was at the dinner and dictated, "this is officially my first Twitter" and added her thoughts about the comedy acts about to perform.

I knew Mrs. Obama should have called it her first "tweet," but I didn't want to be in the uncomfortable position of correcting the first lady -- my mom would be appalled -- and sounding like a tech know-it-all.

She asked Gibbs for his opinion on what she had dictated, and he said the proper way to say it was that it was her first tweet. Mrs. Obama grilled me on whether Gibbs was right, and I said he was but I didn't want to be the one changing her words, so she politely asked me to change it so that she sounded as hip as possible.

The final version, for the history books: "from flotus: 'here at dinner this is officially my first Tweet. i am looking forward to some good laughs from the potus and jay'".

Some of my followers were particularly amused that Mrs. Obama referred to her husband as "the potus" -- as in the president of the United States -- and started re-tweeting it.

It also got me a few more followers, which brings me back to Ali Velshi.

On our daily segment on his show -- the "Ed Henry Segment," of course -- Velshi and I tease each other about necktie choices and who has more people following our tweets.

So let me take this opportunity to encourage the first lady to set up her own Twitter account. I bet it will be a smart way for her to push her initiatives, just as former first lady Laura Bush now has a Twitter account to help sell her memoirs and talk up her pet causes, too.

Besides, I'm hoping Mrs. Obama will follow me, and not Velshi, since I hooked her up with her first tweet.