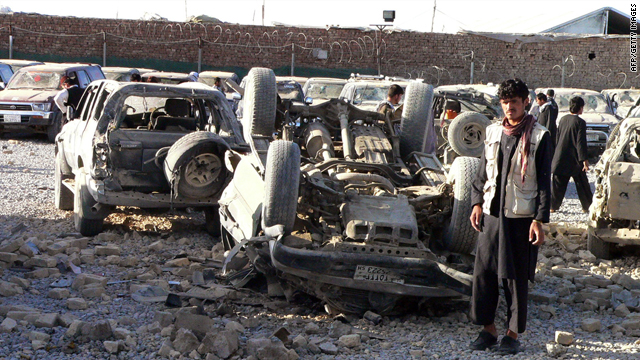 Afghans inspect the debris of a suicide bombing, including an overturned car, on the outskirts of Kandahar in April.
STORY HIGHLIGHTS
RELATED TOPICS

Washington (CNN) -- The House Armed Services Committee on Wednesday took stock of the Obama administration's new counterinsurgency strategy in Afghanistan, and examined whether more troops could be deployed if conditions warrant.

The Obama administration has added about 30,000 troops in Afghanistan since December, bringing to about 100,000 the U.S. force there. Some 40,000 NATO troops also are deployed in the conflict.

Lt. Gen. John Paxton, director of strategic plans and policy for the Joint Chiefs of Staff, was asked whether Gen. Stanley McCrystal, who is heading up operations in Afghanistan, has so far requested additional troops.

Michele Flourney, under secretary of defense for policy, added that part of the president's decision to add the 30,000 troops was to give Defense Secretary Robert Gates "a degree of flexibility" for him to authorize "further troops in support of force protection."

The surge in troop strength is one of several elements in the administration's counterinsurgency strategy, which also seeks to combat the opium trade in the region and give farmers a profitable crop they can raise and support their families with.

Flourney also stressed that the counterinsurgency strategy in Afghanistan is also aiding the global war on terrorism.

"The border region [between Afghanistan and Pakistan] has been the sort of focus of al Qaeda for many years," Flourney said. "So I think denying them sanctuary and denying them safe haven there has a powerful impact on the global impact."

But in addition to the troop surge, Flourney said a good working relationship with the Afghan government is key.

"I think that in any situation, the military strategy takes you so far and at some point there is a political set of outcomes that are reached. We saw this in Iraq. We're working with the Afghan government to try to get a better understanding of the process that they will ultimately lead."

The goal of the Obama plan is to begin withdrawing U.S. troops in July 2011 in an effort to force Afghan officials to take the lead on ensuring their country's security.

Afghan President Hamid Karzai has said his forces will take the security lead in five years, despite doubts among military analysts that the Afghan army and police will be able to provide a sufficient number of trained forces in that period.

Allied and Afghan troops recently retook the southern city of Marjah from the Taliban and have been expected to move on the Kandahar region in June.

Those plans have been met with apprehension by Afghan leaders, including Karzai.

Karzai has told tribal leaders in the Kandahar region, the Taliban's traditional stronghold, that he would hold back the NATO offensive until he had their backing. His insistence on that support has frustrated the White House.

Karzai told a gathering of tribal leaders in early April that the U.S.-led alliance would not move against Taliban fighters in Kandahar "until you say we can." White House spokesman Robert Gibbs told reporters a day later that Karzai's remarks were "genuinely troubling."