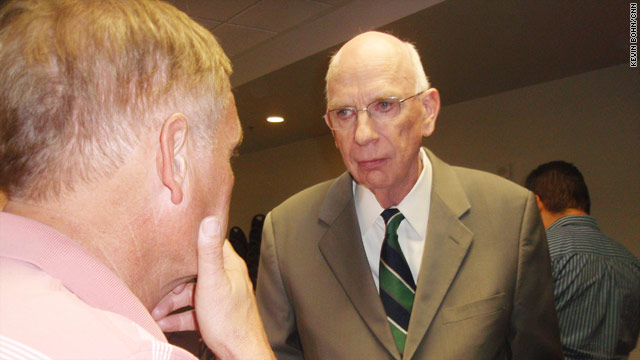 Salt Lake City, Utah (CNN) -- Three-term Republican Sen. Bob Bennett knew this would be a tough year to run for re-election. He just had no idea how tough.

Bennett faces the real possibility of failing even to make it to a primary, depending on the results of the state's GOP convention Saturday.

" 'Shocked' is not the right word. I'm adjusting," Bennett said. "The anger against Washington is very, very palpable -- very, very strong. And since I am in Washington, I become the focus of that anger."

The 76-year-old incumbent is facing off against seven challengers, all of whom are more conservative.

One of the key men leading the effort to oust Bennett is political newcomer David Kirkham, who last year founded the state's Tea Party chapter. He wants to punish the senator for his vote to authorize the 2008 financial bailout.

Asked whether he thought Bennett should lose his seat over that one vote, Kirkham said, "That one vote was pretty toxic. That one vote affected a lot of things, changed the rules of the game. President Bush said that where we have to abandon free market principles to save the free market, and fundamentally, we just don't agree. There's just no way."

Bennett said he doesn't regret his vote, "because we were facing a very genuine crisis. And I would not want my career to be marked with shirking my responsibility to prevent the crisis from happening."

Bennett is no moderate. He regularly receives high marks from conservative groups including the National Rifle Association and the National Right to Life Committee. He voted against the president's stimulus plan and the administration's health care proposal.

Video: Sen. Bennett: 'I am in trouble'
RELATED TOPICS

Helping fuel the anger at him is his outreach to Democratic colleague Sen. Ron Wyden. The two proposed a bipartisan health care overhaul alternative, which ended up going nowhere. Still, some party activists are disappointed that he tried to make a deal at all.

Other delegates are disappointed that Bennett was unable to stop the Democrats' health care bill from becoming law, though Bennett and his GOP colleagues did everything they could to thwart it.

The senator believes that he's caught up in an anti-incumbent fever that doesn't distinguish between parties.

"I represent Washington, and there is anti-Washington feeling sweeping through the country, and they don't differentiate between Republicans and Democrats.

Bennett's fate could be decided Saturday, when 3,500 GOP delegates cast ballots at the party convention. In order to make it onto the November ballot, a candidate must get 60 percent of the vote. If no one reaches that threshold, the top two will face off in a June 22 primary.

Various polls show Bennett running second or third. Front-runner Mike Lee is campaigning on a platform committed to limited government and a closer adherence to what he believes to be the meaning of the Constitution.

"It's time to move in a new direction," Lee said. "We're ready for a new generation of leaders who will think through the constitutional implications, based on the text of the Constitution, of actions of Congress. Congress is spending too much. Congress is doing too much, and it's not supposed to be all thing to all people."

Also polling in the top tier entrepreneur is Tim Bridgewater, who along with Lee has done concerted outreach to Tea Party activists.

The mild-mannered Bennett and his campaign say they've been reaching out to party delegates, trying to win enough votes to at least make it into a primary. But he knows what he's up against.

Bennett acknowledges that for some of these delegates, "It doesn't really matter I have a record of a solid conservative pattern of things I have done back there. They just want everybody in Washington out. Throw them all out, and we will start fresh."