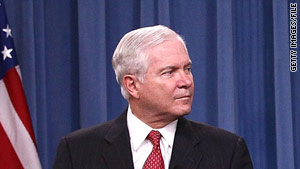 (CNN) -- The Pentagon must hold down its spending and make choices that will anger "powerful people" in an era of economic strain, Defense Secretary Robert Gates said in a weekend speech in Kansas.

Increasing health care costs, a top-heavy uniformed and civilian management force, and big-ticket weapons systems are swelling the military's budget at an "unsustainable" rate, Gates said. In response, Gates said, he has ordered the Defense Department's military and civilian leaders to find savings of 2 to 3 percent -- more than $10 billion of the Pentagon's roughly $550 billion base budget -- and shift spending toward war-fighting costs.

"These savings must stem from root-and-branch changes that can be sustained and added to over time," he told an audience Saturday at the Eisenhower Presidential Library in Abilene. "Simply taking a few percent off the top of everything on a onetime basis will not do."

On his way out of office in 1961, President Eisenhower -- the former general who led allied forces in Europe during World War II -- warned of the expanding influence of what he called the "military-industrial complex." Nearly 50 years later, Gates invoked that history to warn that the cuts on the way "will displease powerful people, both inside the Pentagon and out."

The U.S. defense budget has more than doubled since the September 11, 2001, attacks on New York and Washington and the 2003 invasion of Iraq. Since taking office in 2006, Gates has managed to cut some of the Pentagon's major weapons systems, but efforts to kill other programs have been defeated under heavy pressure from military contractors and members of Congress.

"Given America's difficult economic circumstances and parlous fiscal condition, military spending on things large and small can and should expect closer, harsher scrutiny," he said. "The gusher has been turned off, and will stay off for a good period of time."

"He sees the political winds and recognizes he will not be able to get the budgets that he needs," Kimmitt told CNN. "What he wants to do is protect the muscle. By cutting away at some of the fat, he can keep the money necessary to keep the constantly increasing budget to maintain a strong and ready force."

Gates acknowledged that many of his predecessors have tried and failed to do the same thing. But he said the U.S. force structure should be reviewed in "the wider, real-world context" and was probably out of scale to existing threats.

"For example, should we really be up in arms over a temporary projected shortfall of about 100 Navy and Marine strike fighters relative to the number of carrier wings, when America's military possesses more than 3,200 tactical combat aircraft of all kinds?" Gates asked. "Does the number of warships we have and are building really put America at risk when the U.S. battle fleet is larger than the next 13 navies combined, 11 of which belong to allies and partners? Is it a dire threat that by 2020 the United States will have only 20 times more advanced stealth fighters than China?"

Gates said defense spending was roughly twice the share of the U.S. economy in Eisenhower's day -- "but today, we face a very different set of American economic and fiscal realities."

"As a matter of principle and political reality, the Department of Defense cannot go to America's elected representatives and ask for increases each year unless we have done everything possible to make every dollar count," he said.