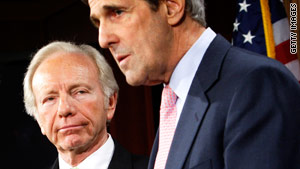 Joined by leaders of industry, religion and conservation, Sens. John Kerry, D-Massachusetts, and Joe Lieberman, an independent from Connecticut who sits with the Democratic caucus, told a news conference that the proposal offered a broad-based approach that would end the nation's dependence on foreign oil while keeping U.S. industry competitive.

Kerry cited the Gulf of Mexico oil spill as the latest example of "how urgently we need a new energy policy in this country." He called the support reflected by the coalition of leaders at the news conference unprecedented and a signal that the nation was ready to move forward.

The House has passed its own energy bill, and President Obama said Wednesday he backed the efforts by Kerry and Lieberman to move the issue forward in the Senate.

"Now is the time for America to take control of our energy future and jump-start American innovation in clean energy technology that will allow us to create jobs, compete, and win in the global economy," Obama said in a statement.

However, Senate Majority Leader Harry Reid, D-Nevada, has indicated he wants immigration reform to take priority, and the politics of midterm congressional elections in November raises questions about the the possibility of gaining final approval this year of such major legislation as energy reform.

Reid's position caused a potential Republican co-sponsor, Sen. Lindsey Graham of South Carolina, to drop out of the talks with Lieberman and Kerry on drafting the proposal.

"The problems created by the historic oil spill in the Gulf, along with the uncertainty of immigration politics, have made it extremely difficult for transformational legislation in the area of energy and climate to garner bipartisan support at this time," Graham said in a statement Wednesday.

At the news conference, Kerry, Lieberman and other speakers -- including some traditional reform opponents such as energy and manufacturing companies -- insisted that further delay would only damage America's ability to compete in the growing alternative energy market while continuing to send oil money overseas and contributing to climate change.

Lieberman listed benefits such as ending dependence on foreign oil, creating jobs and reducing greenhouse gas emissions, saying the proposal "does all that without adding a dime to our deficit."

Jim Rogers, chairman and CEO of Duke Energy, a major coal-energy company, said, "This bill helps get the transition right to a low-carbon world." The legislation provides incentives for clean coal and nuclear energy which are "two key technologies that must be accelerated going forward in order to meet our national goals," said Rogers.

Responding to critics who claim energy reform means increased costs and taxes, Kerry and Lieberman said energy-bill discounts and direct rebates would give back to consumers two-thirds of the proposal's revenue that isn't dedicated to deficit reduction. Additional tax cuts and an energy-refund program would help Americans "who may be disproportionately affected by potential increases in energy prices," according to supporting documents Kerry and Lieberman supplied.

The proposal addresses a range of energy issues including expanded nuclear power production, incentives for the coal industry to seek cleaner methods, money to develop alternative energy sources and programs to help U.S. industry in the transition to a low-carbon system.

On climate change, the 987-page bill seeks escalating reductions in greenhouse gas emissions in coming decades that match the levels set as goals by the Obama administration and contained in a separate House energy bill passed last year. For example, the proposal calls for emissions reductions from 2005 levels of 17 percent by 2020, 42 percent by 2030 and 83 percent by 2050, the supporting documents said.

The proposal includes a tax on greenhouse gas emissions above allowable limits, but delays the charge on industrial emitters until 2016. In addition, it includes incentive programs for industries and sectors to shift away from fossil fuels and high emissions, including $6 billion a year for transportation infrastructure to increase efficiency and decrease oil consumption.

By putting a fixed price on greenhouse gas emissions, the proposal would provide manufacturers, utilities and others certainty in assessing costs to invest in new technology, Lieberman said.

To Lewis Hay, the chairman and CEO of leading electricity provider FPL Group, the emissions tax put renewable energy sources such as wind power and solar power "on a level playing field" with other sources that emit greenhouse gases.

The Senate proposal includes expanded offshore oil drilling as part of a strategy to increase domestic production. However, provisions strengthening the ability of states to prevent more drilling off their coasts were added in the wake of the Gulf of Mexico oil spill.

Environmentalists offered mixed praise for the measure, calling it a good start while insisting it needed to go further in some areas.

"The core carbon pollution limits in the bill, covering all major pollution sources, are a solid foundation for Senate legislation," said Frances Beinecke, president of the Natural Resources Defense Council. "These emission limits, which will get tighter every year, will drive investments in clean energy that create jobs, cut pollution, and end our addiction to oil from dangerous locations, both offshore and overseas," Beinecke said.

"The bill would be more effective if its overall pollution limits were backed up by minimum performance standards for the largest polluters."

CNN's Martina Stewart and Tom Cohen contributed to this report.