No alert for U.S. troops in Korea, Pentagon says 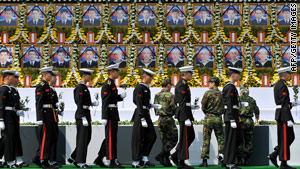 Washington (CNN) -- U.S. troops based in South Korea have not been put on a heightened state of alert in the wake of that country's announcement that North Korea was behind the sinking of one of its warships in March, the Pentagon said Thursday.

At a Pentagon press briefing, U.S. Defense Secretary Robert Gates said the United States supports the findings of the investigation -- that the ship was sunk by a North Korean torpedo -- but he would not say what the United States is prepared to do, if anything, militarily.

"We are in close consultations with the South Koreans," Gates said. "The attack was against one of their ships and, naturally, they will have the lead in laying out the path forward and we will be consulting with them very closely as we move ahead."

Joint Chiefs of Staff Chairman Adm. Mike Mullen said the status of the 28,500 U.S. troops in South Korea has not changed because of the findings.

"We have a considerable number of forces stationed both on the land and sea and the forces are clearly aware of what's going on," he said.

Though Gates and Mullen would not speculate on what the next step would be for South Korea, the United States is bound by treaty to assist that nation if it goes to war.

The U.S. Army is stretched thin in two wars in Iraq and Afghanistan, but Gates said there are other options in the case of armed conflict on the Korean peninsula.

"We have said for a long time that if there were a problem in Korea our main arms would be the Navy and the Air Force, and those are not stretched in the same way that the ground forces are," he said.

Earlier Thursday, White House Press Secretary Robert Gibbs said the United States was "in consultation with a host of different entities, including the [U.N.] Security Council ... and we're working closely with the South Koreans."

"I think there's a lot of things on the table" in terms of possible responses, he added.

Meanwhile, the State Department said the United States will send a clear signal to North Korea that the sinking of the warship was in violation of international norms and it must pay a price.

"Provocative actions will not be tolerated and ... there will be consequences for those," Assistant Secretary of State P.J. Crowley told reporters.

"At the same time, we will continue to try to see what can be done ... to continue to work towards a peaceful and stable Korean Peninsula and the broader region," he said.

Crowley said the United States has a "range of tools available" to respond to the incident both unilaterally and collectively with other countries, including unilateral financial sanctions and other measures. However, he said, Washington will be guided by the actions the South Korean government wants to take.

Asked whether the United States would consider putting North Korea back on the State Department's list of state sponsors of terrorism, Crowley said it was unclear whether the ship incident would be considered an act of terrorism to meet the legal threshold for such a designation.

The Bush administration took North Korea off the list in 2008 as part of negotiations on ending Pyongyang's nuclear program.

"This is not something that anyone would do lightly, and there is an evidentiary standard here that has to be applied," Crowley said. "Terrorism normally involves ... acts of violence against innocent civilians. You know, at one level this was a torpedo fired by one military vessel at another military vessel."

Senior State Department officials said that although the department's lawyers would make the final determination, the attack is not likely to be considered a terrorist attack because North and South Korea are technically at war. They pointed to a statement issued by the White House calling the attack an "act of aggression" and "a violation of the Armistice Agreement."

That 1953 agreement inaugurated an uneasy truce between the two Koreas, but no peace treaty has been signed to end the war.

Additionally, the officials suggested that putting North Korea back on the terrorism list could be counterproductive because the United States was not the target of the attack.