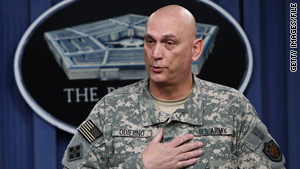 Washington (CNN) -- President Barack Obama met Wednesday with U.S. Army Gen. Ray Odierno to get a first-hand account of conditions in Iraq from the top commander for the country.

A White House spokesman said Odierno "provided a positive assessment" of security conditions and the transfer of responsibilities to Iraqi security forces ahead of completing the planned withdrawal of most U.S. troops by the end of August.

Odierno is responsible for determining the pace of withdrawal of American forces from Iraq, but the Obama administration has said the deadline for bringing home all but 50,000 troops by the end of August remains on schedule despite the recent spike in violence there.

A CNN/Opinion Research Corp. survey released Saturday found that 64 percent of Americans favor the president's plan to keep the 50,000 U.S. troops in Iraq by the end of the summer, with 35 percent opposed.

But the national poll indicated that support for the planned removal could drop significantly if Iraq cannot solve its current problems in coming months.

With the ongoing reduction of troops in Iraq, the U.S. now has more troops in Afghanistan than Iraq for the first time since 2003.