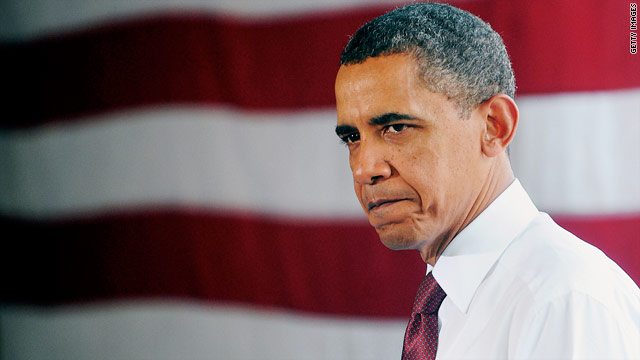 Can Obama afford to be angry?
STORY HIGHLIGHTS

Watch CNN tonight for a discussion on the history of presidential toughness. Don Lemon asks the question: How tough should a president be when in the public eye? CNN tonight, 8 ET

(CNN) -- Here's proof that President Obama has indeed ushered in a new era in race relations.

Who would have ever expected some white Americans to demand that an African-American man show more rage?

It's the lesson Obama absorbed from his upbringing, and from an impromptu remark he delivered last summer. Yet it's a lesson he may now have to jettison, they say, as public outrage spreads.

"Folks are waiting for a Samuel Jackson 'Snakes on the Plane' moment from this president as in: 'We gotta' get this $#@!!* oil back in the $#!!* rig!' But that's just not who Obama is,'' says Saladin Ambar, a political science professor at Lehigh University in Bethlehem, Pennsylvania.

Some of the same people crying for Obama to show more emotion would have voted against him if he had displayed anger during his presidential run, says William Jelani Cobb, author of "The Substance of Hope: Barack Obama and the Paradox of Progress."

"It would have fed deeply into a pre-existing set of narratives about the angry black man," Cobb says. "The anger would have gotten in the way. He would have frightened off white voters who were interested in him because he seemed to be like the black guy they worked with or went to graduate school with -- not a black guy who is threatening."

Now some critics say that Obama should be a little bit more threatening.

On Monday, Matt Lauer on NBC's "Today" told Obama that critics don't want him to react to the oil disaster by meeting with experts and being calm. They want him to "kick some butt."

Video: Obama wants to know 'whose ass to kick'

Obama responded by saying he talks to experts "because they potentially have the best answers, so I know whose ass to kick."

Obama's tough talk comes after criticism mounted over his response to the oil fiasco.

Obama's cool temperament even prompted black filmmaker Spike Lee to tell CNN that for at least one time, Obama should "go off."

But Obama has "gone off" before and that didn't work too well for him, says Ambar.

During a news conference last summer, Obama casually said that police acted "stupidly" when they arrested Harvard professor Henry Louis "Skip" Gates in his home for disorderly conduct after a confrontation with a white police officer.

Obama's comments infuriated many white people, and even some black supporters. Obama had to have a Beer Summit to calm the public uproar.

"He flashed genuine anger," says Ambar. "At that moment, when he touched on the issue of race, he spoke frankly and passionately about what he felt and it got him into a big deal of trouble."

Evoking the specter of the angry black man almost cost Obama his shot at the White House, says Paul Street, an author and political activist who worked with Obama in Chicago.

Folks are waiting for a Samuel Jackson 'Snakes on the Plane' moment from this president.
--Saladin Ambar, political scientist

Street says videos of Obama's former pastor, the Rev. Jeremiah Wright, angrily condemning America were so dangerous to Obama's campaign because it hinted that Obama may have been an angry black man behind closed doors.

"Rev. Wright almost cost him his run for the presidency because of fears of the angry black man," says Street, author of the upcoming book "The Empire's New Clothes: Barack Obama in the Real World of Power."

"What was Rev. Wright but the ultimate symbol of the angry black man who is going to take revenge," Street says.

That symbol is hardwired into American history and popular culture. It's Nat Turner, the slave who inspired a bloody 19th-century uprising. It's Malcolm X, the black militant who denounced "blue-eyed devils."

It's the hip-hop and rap artists who populate contemporary radio.

Why Obama can't get angry if he tried

Obama, though, has spent a lifetime trying to rewrite that script, says Street, who says he worked with Obama in Chicago.

"He is Mr. Equanimity and Mr. Consolation," says Street. "That's how he negotiated his way through multiple worlds, and reached out across bridges."

In his 1995 memoir, "Dreams of My Father," Obama explained why he thought such negotiation was necessary when he met white people as a young man growing up in Hawaii.

"People were satisfied so long as you were courteous and smiled and made no sudden moves. Such a pleasant surprise to find a well-mannered young black man who didn't seem angry."

If Obama wants to go down as a great president, though, he may have to discover the political value of rage, others say.

Franklin Roosevelt was such a president, historians say. During the Great Depression, he went after business leaders who opposed his New Deal policies. Roosevelt once said that he "welcomed the hatred" of the economic elites.

Could Obama become a 21st-century version of Roosevelt, not only in taking on the oil companies but big bankers as well?

Ambar, from Lehigh University, doesn't think so. Obama doesn't share Roosevelt's elite background, which inoculated him from charges of being anti-American. Roosevelt came from a prominent, and wealthy, American family.

"It's easier to do it if your name is Roosevelt," Ambar says. "No one questions your love of capitalism or your patriotism."

The BP oil spill, though, goes beyond race. It is so egregious that Obama now has permission to stoke some "pitchfork, populist" anger, says Street.

Rev. Wright almost cost him his run for the presidency because of fears of the angry black man.
--Paul Street, Obama biographer
RELATED TOPICS

"He's now in danger of being perceived as being too soft and conciliatory and too much in the bed of corporations," he says.

"He would be politically dead; it would be over," Street says.

Yet the call for a black man to show more emotion on subjects outside of race is still a healthy development, says Ambar, from Lehigh University.

"I take it as a sign of progress that people are calling for Obama to be angry, an almost impossible sentiment a decade ago," he says.

Still, Obama must be careful about getting in touch with his inner-Samuel Jackson, others say.

Just as gushing oil lurks below the Gulf's surface, all sorts of ugly, racial undercurrents exist beneath the surface of American politics, Baick says.

"Our commander in chief has many burdens, and among them is our history and culture," Baick says. "Compared to the weight of that, the current BP crisis and the years of environmental damage and cleanup must seem transient."