Williams steps aside as chairman of Tea Party Express 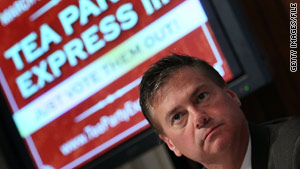 Mark Williams says he will be taking a back seat when it comes to Tea Party Express day-to-day responsibilities.
STORY HIGHLIGHTS

Williams said his decision stemmed from his involvement in two other major projects.

One is opposing the construction of a mosque near the site of Ground Zero in New York, where the twin towers of the World Trade Center were destroyed by Islamist hijackers on September 11, 2001.

The other is leading a recall effort against some members of the Sacramento City Council and running for a spot on the local body himself after the council voted to boycott Arizona over its new immigration law.

"What I'm doing is thinking globally and acting locally," Williams said of his bi-coastal commitments.

Williams said he will continue to be involved with the Tea Party Express as a spokesman, a featured speaker at the group's events, in television and print media and generally as a public face of the organization.

But Williams will be taking a back seat when it comes to the Tea Party Express' day-to-day managerial responsibilities.

"I'll still be shooting my mouth off and appearing on TV," said Williams. "I just won't be as critical in strategy which is fine by me."

Pointing out that the organization has grown so large and consists of a network of volunteers spread out all over the country targeting a number of midterm races, Williams said the group now needs something akin to a chief executive officer.

The Tea Party activist said he's already weighed in internally within the organization about who should succeed him as chairman.

And the outspoken conservative said recent controversial comments on his part played no role in his change in status within the Tea Party Express.

"This initiative came from me," said Williams. "Once I got involved in this recall effort, I realized I would have zero time."

Williams also said the recall effort "is an example of Tea Party philosophy in action. You see something wrong and you step in to fix it."