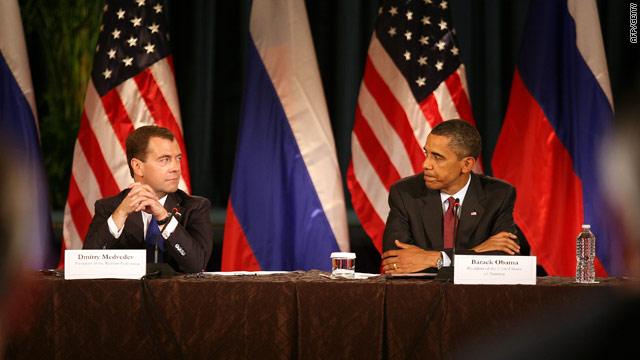 During a busy day that included White House talks, a joint news conference and participation in a U.S.-Russia business council meeting, the two presidents repeatedly cited strengthening relations between their countries after what Obama called a "drift" under the previous administration.

Faced with the continuing struggle to recover from the global economic recession, nuclear ambitions of Iran and North Korea, terrorism threats and other major issues, Obama and Medvedev said the world needed a strong U.S.-Russian relationship in the 21st century.

Obama called Medvedev a "solid and reliable partner" and repeated his commitment to "resetting, but also broadening" ties, while Medvedev called for a "level of economic cooperation in line with the potential" of the two nations' economies.

"We want this volume to grow" with each country investing in the other, Medvedev said. "It's not a one-way road."

Obama called for accelerated talks on Russia's membership in the WTO, a goal of the former communist country in its efforts to fully join the global economy. He noted agreements announced Thursday on energy technology trade and the readmittance of U.S. poultry exports to Russia as signals of Russia's serious intent to become a WTO member.

However, Obama offered no estimate of when the country would join the 153-nation group that sets rules for international trade. Russia currently is an observer nation.

Medvedev noted that Russia has made progress on preparing for membership including necessary changes in Russian laws and steps on issues such as electronic property. He said some "minor technical problems" remain, and he hoped they would be resolved by the end of September.

Russia was a major importer of U.S. poultry but banned the product earlier this year in a dispute over the safety of a chlorine rinse used in the United States.

On other issues, the two presidents acknowledged they had differences over the situation in Georgia, the former Soviet state seeking NATO membership that disputes the autonomy claim of Russian-backed South Ossetia.

However, Medvedev said Russia backed the U.S. goal of a stable Afghanistan, saying that helping to build a secure government and economic growth there would prevent the kind of military quagmire the Soviets experienced in the 1980s.

Earlier, the two leaders were joined in a meeting at the White House by Vice President Joe Biden, Secretary of State Hillary Clinton, national security adviser James Jones, and trade and diplomatic officials.

Obama then treated Medvedev to an all-American lunch at what apparently is one of his favorite spots -- Ray's Hell Burger in Arlington, Virginia.

Each president had a burger and they shared fries, with Obama paying the bill. Medvedev later joked that the meal might not be healthy, but it tasted good.

Last year, Obama made another unscheduled lunch stop at the restaurant with Biden.

Medvedev took a technology tour of California a day earlier, visiting Cisco Systems for the company's announcement of a $1 billion investment in Russian projects. He sent his first Twitter message after the meeting.

On Thursday, Obama joked that he also had a Twitter account, "so we may be able to throw away those red phones that have been sitting around for so long."

The red phone is an icon of the Cold War that was first established after the Cuban Missile Crisis. It served as a direct line between the White House and the Kremlin in the event of a nuclear confrontation that required immediate consultation.