Petraeus brings change in leadership but similarity in style 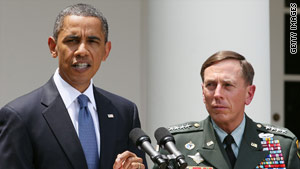 A spokesman for Gen. David Petraeus says he likes getting people "out of their comfort zones."

Washington (CNN) -- On paper, it appeared to be a winning team for President Obama and his new plan to fix Afghanistan: a celebrated general, a master of counterinsurgency strategy overseeing the wars in Iraq and Afghanistan as head of CENTCOM, with his his protege running the war in Afghanistan.

The two -- Gens. David Petraeus and Stanley McChrystal -- had enjoyed success because of their military minds. Ask around the Pentagon, and the phrase most often used in connection with both is "brilliant."

While coming from different paths, both generals have a good deal of similarities. After the now-infamous Rolling Stone article, however, it is clear that Petraeus alone has the savvy to survive in Washington.

An academic with political deftness, Petraeus approaches combat with a mix of military and diplomacy, the essence of counterinsurgency.

Petraeus made his first big mark with a successful air assault in northern Iraq in 2003 and kept the region U.S.-friendly while the rest of the country spiraled into chaos. He then used the counterinsurgency strategy to help bolster the U.S. war effort in Iraq for President George W. Bush.

His reward: running Central Command, which oversees both wars, as well as being responsible for other tricky spots like Yemen and Iran.

A year ago, McChrystal was appointed the head of Afghanistan operations, highly recommended by both the chairman of the Joint Chiefs of Staff, Adm. Mike Mullen, and Defense Secretary Robert Gates.

U.S. military officials who know him tell CNN he is a minimalist who prefers to stay in the field with his men and has a dislike for "flash and flair," according to one Army official familiar with McChrystal's work, but who would not speak on the record.

McChrystal expected something similar from his troops, stripping his headquarters of the in-house cafe and ordering the closure of fast-food restaurants on the biggest base, Bagram.

Petraeus, according to an Army official close to the general who was not authorized to speak on the record, likes a bit more comfort and does not mind some "flash."

Troops that have worked with both generals say the one thing they have in common is they are loved by the lower-ranking troops because they both make constant, direct contact with them in the field.

McChrystal was known to visit troops on the front line and literally eat, drink, and sleep in the same areas with them, according to officials. Petraeus is known to also go into the field, commending good work and encouraging troops to contact him directly to discuss it, according to Col. Steven Boylan, Petraeus' spokesman for three years.

The leadership style of the generals has been similar as well, according to Michael O'Hanlon, a Brookings Institution military analyst who has advised McChrystal and knows Petraeus well.

"I think that both are extreme workaholics, very energetic. Both of them are good communicators," according to O'Hanlon. "Both are extraordinarily respected. Petraeus is, of course, known now to be a historic figure, not only in terms of his accomplishments but as a public profile, and McChrystal has been a quieter figure through the years," he said.

Generals are also as good as the people they have surrounding them, and sources seem to agree that both men have surrounded themselves with extraordinary staff.

"He had and has a diverse staff," Boylan said of Petraeus. "He likes to bring in people for their abilities, not necessarily their backgrounds," he said. But Petraeus has a doctorate and does keep a staff with other Ph.D.s.

"He likes getting everyone out of their comfort zones, because he believes that is the best way to get good ideas and more diverse thoughts and potential solutions to problems," according to Boylan.

McChrystal surrounded himself with a staff of similar backgrounds as his own from Special Forces, according to military officials.

"There are different, specific individuals, but they are not totally different types," according to O'Hanlon. "They're all cerebral, hardworking. Frankly, they're quite loyal, quite respectful, despite this magazine portrayal," he said.

However, one military official who would not speak on the record thinks McChrystal's undoing may have been that his staff was from a similar Special Operations background. Special operations forces as tradecraft stay out of the limelight and the media to keep their anonymity.

"Gen. McChrystal and the special operations community have not been offered the opportunities to learn the art of dealing with the media. They tend to avoid media engagements at all levels," the official said.

Despite how the article's tale of the staff played out, O'Hanlon said it is a "reflection of bad judgment on the staff."

But, he says, "I've seen him [McChrystal] in action and been around him in private settings, and he doesn't act like this typically, nor does his staff."