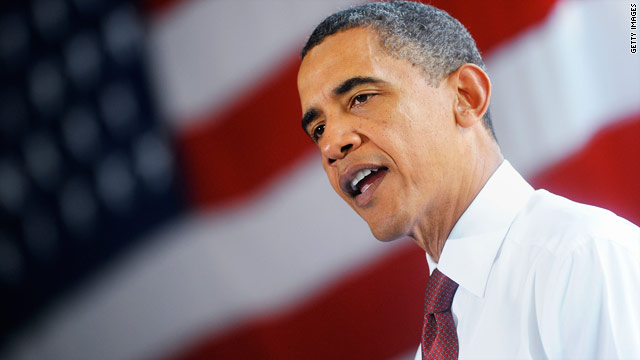 President Obama has pointed fingers at the Bush administration, but Republicans say he should take ownership of the economy.
STORY HIGHLIGHTS

(CNN) -- When signs of a severe economic downfall emerged more than two years ago, then-candidate Barack Obama was quick to point a finger at the man he hoped to replace.

Seventeen months into his administration, the message is often the same, and Republicans say it's time for him to drop the Bush bashing and take ownership of the problem.

"Nothing makes a president look weaker than pointing the finger at past administrations," said Republican strategist Ron Bonjean. "By blaming somebody, it looks like you are playing politics and people just want jobs. They don't care about whose fault it is. Playing the blame game only boomerangs on yourself."

Obama repeated that message this week when talking about the still-sputtering economy, twice reminding those at a town-hall meeting in Wisconsin that he "inherited" the economic mess.

It's a familiar message from his days on the campaign trail when criticisms of President Bush were as common as policy proposals.

"History will not judge President Bush kindly for his failure to act in a way that could have prevented or alleviated this economic crisis," Obama said in March 2008 shortly after Bear Sterns' collapse, slamming Bush for failing to instill confidence in the American people.

Recent surveys suggest Obama isn't the only one holding the Bush administration and Republicans culpable.

Though the Democrats controlled Congress in the last two years of the Bush administration and have controlled both the White House and Congress for a year and a half -- 41 percent of people surveyed in a recent CNN/Opinion Research Corp. poll said Republicans are responsible for the current economic problems. Twenty-eight percent blamed Democrats, and 26 percent said both parties share responsibility.

According to a Washington Post/ABC poll conducted in April, 59 percent blamed Bush for the economy, compared with 25 percent who said Obama is at fault.

The unemployment rate fell to 9.5 percent from 9.7 percent in May. Economists had forecast it would climb to 9.8 percent, but the improvement was due mostly to discouraged job seekers not bothering to look for work and no longer being counted in the labor force.

Obama on Friday vowed to do everything in his power to create jobs, but the problem, according to economist Barry Bosworth, is there's not much more he can do.

"What can he do on the jobs other than sit around and wring his hands in agony?" he asked. "What could he do? That's the fundamental problem that we now face because it's a global problem."

Coming out of the Group of 20 conference, it was clear Obama's plans to continue stimulus spending weren't in step with other nations'.

"The whole world is going to turn toward fiscal restraint now, and he can either join it or he'll be an outlier," said Bosworth, a senior fellow at the Brookings Institution and a former adviser to President Carter.

After the numbers came out, Obama said the country is headed in the right direction but added, "The recession dug us a hole of about 8 million jobs deep."

But Bosworth said it's not fair to put all of the blame on the past administration.

"They didn't cause that crisis. Lots of people contributed to it. I really do not think that you can blame administrative authorities for what happened. You can blame a lot of economists because we didn't see it coming in the exact way it did, but there were many dimensions," he said, pointing out that in retrospect it's easy to recognize there was an unbalanced economy.

Bosworth said Obama now needs to move away from blaming Bush because the worst of what happened wasn't Bush's fault.

Economic recovery has been slow, but there are signs of improvement. The stock market, while wobbly, has risen since the lows reached shortly after Obama took office, and the economy is growing again.

Democratic strategist Julian Epstein said Obama needs to make the argument that the economy is on the climb and the stimulus has worked.

The White House needs to go on a confidence campaign and perhaps take a page from President Reagan's playbook, Epstein said.

"He really needs to spell out how we are coming back and it's morning in America again," he said.