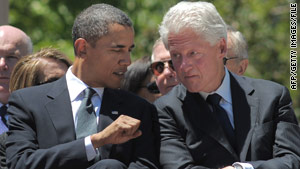 The White House wants to use Bill Clinton in key states where President Obama is not particularly popular, officials said.
STORY HIGHLIGHTS

Washington (CNN) -- Facing a bruising midterm election in less than four months, President Barack Obama's aides are putting together an aggressive schedule to deploy former President Bill Clinton at campaign and fundraising events in key states around the country, according to Democratic officials familiar with the plans.

"It's a no-brainer you would use one of the most talented politicians the country has ever had," said one Democratic official familiar with the discussions. "There are few as good at laying out the contrast with Republicans."

There has been speculation Clinton might not be used that frequently because of lingering frostiness between the two presidents dating to the divisive days of the 2008 campaign. But the two camps tried to put any such tension to rest in recent weeks at a quiet White House meeting between Clinton aide Doug Band and White House Political Director Patrick Gaspard, according to officials familiar with the discussions.

When Robert Gibbs was asked at the time if the White House would like to be notified of such an endorsement earlier in the process, the press secretary responded, "Before you guys? Sure."

In addition to smoothing things over at the White House meeting, Democratic officials told CNN the Clinton and Obama teams mapped out an ambitious schedule to get Clinton on the campaign trail as often as possible in between his foreign travels to such hot spots as Haiti.

"We want whatever we can get from him," said one of the senior Democratic officials involved in the conversations.

Democratic officials told CNN the White House specifically wants to use Clinton in key swing states where Obama is not particularly popular, such as Arkansas and Kentucky. In his home state of Arkansas, Clinton already helped Democratic Sen. Blanche Lincoln survive an intense primary challenge earlier this year and will now be used to help save the incumbent in an even tougher general election match-up with Republican John Boozman.

Clinton also will be used in Kentucky, where the White House has high hopes of picking up a seat with Democratic nominee Jack Conway facing Republican Rand Paul, who has been engulfed in a series of controversies.

"I think he and President Obama will be a good one-two punch," added a second senior Democratic official.

The second official noted that Obama cannot travel to every single congressional district over the next four months, and there are some specific regions where Obama would not go over well but Clinton could play better. Clinton recently campaigned tirelessly in Arkansas, a state that Obama lost badly to Sen. John McCain, R-Arizona, in 2008, to help Lincoln survive a runoff.

In May, the former president also campaigned for Mark Critz, the Democratic candidate in the special election to fill the late Democratic Rep. John Murtha's Pennsylvania seat. Clinton got a lot of credit among Democrats after Critz defeated Republican Tim Burns, giving the party a shot in the arm in a difficult year.

Democratic officials also say that Clinton's campaigning could fit well into the narrative that Obama has been focusing on in recent days about how he inherited an economic mess from former President George W. Bush and now believes the midterm election is a choice between going back to failed policies or moving forward on policies that could help pull the U.S. out of recession.

"Let's not forget that Bill Clinton was the last Democratic president who had to clean things up after years of Republican rule," said one senior Democratic official. "Clinton made tough choices that created [budget] surpluses. He can go out there and say, 'Look, I've lived this.' He's got a lot to offer because it's like an eyewitness account to what the country will look like if Republicans get in charge -- the obstruction, the investigations."