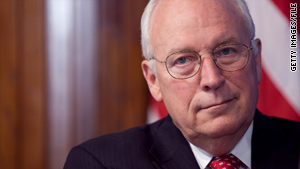 During the operation last week at the Inova Fairfax Heart and Vascular Institute, doctors implanted a small pump that "improves heart function and will enable me to resume an active life," Cheney's statement said.

"The operation went very well and I am now recuperating," the statement said.

"These devices are put in patients whose heart failure is so bad that they need a mechanical pump to keep their circulation going," said Gardner, who is the medical director of the Center for Heart and Vascular Health at Christiana Care in Wilmington, Delaware.

Gardner was not involved in Cheney's treatment.

Cheney has a history of heart problems, including five heart attacks dating back to the first one he suffered in 1978 at age 37.

"A few weeks ago, it became clear that I was entering a new phase of the disease when I began to experience increasing congestive heart failure," Cheney's statement said. "After a series of recent tests and discussions with my doctors, I decided to take advantage of one of the new technologies available and have a Left Ventricular Assist Device (LVAD) implanted."

Cheney also suffered heart attacks in 1984 and 1988, and underwent a quadruple bypass surgery to unblock his arteries. Shortly after Cheney was elected vice president in November 2000, he had a fourth heart attack and received a stent to open an artery.

He was released from a Washington, D.C., hospital on June 28 after suffering from "progressive retention of fluid related to his coronary artery disease," his office said at the time.