Analysts: Bill Clinton can help Democrats, but how much? 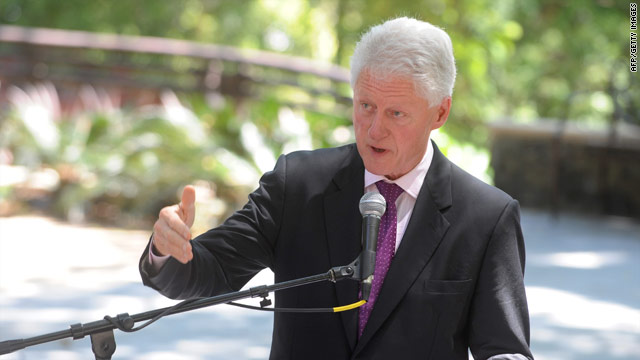 Former President Bill Clinton will continue to fundraise and stump for Democratic candidates across the country.
STORY HIGHLIGHTS

Washington (CNN) -- Former President Bill Clinton, the man once described as the "comeback kid" during his 1992 presidential bid, has now become something of a go-to guy for Democratic candidates facing a tough election battle.

Economic woes and fears over the rising national debt have weighed heavily on voters -- especially independents, who are leaning more toward Republicans than Democrats, according to recent polls.

The Obama administration is now putting together an aggressive schedule to deploy Clinton to campaign appearances and fundraising events in key states around the country, Democratic officials familiar with the plans told CNN.

"I think it's advantageous for the Democratic candidates to have someone like Bill Clinton, because when he comes into a community, there will be all that wonderful media coverage. And Bill Clinton is certainly extremely capable of making the point about the Republican opposition and what they've been doing and not doing," he said.

The White House wants to use the former president in swing states where Obama is not necessarily popular, such as Arkansas and Kentucky, the Democratic officials said.

Video: Battle for the House

"It makes a hell of a lot of sense to have the more popular fellow come into your community and campaign for you," he noted.

In his home state of Arkansas, Clinton helped Democratic Sen. Blanche Lincoln survive an intense primary challenge in a runoff election. His efforts will once again be used to try to keep her in office as she faces a tough Republican opponent in John Boozman.

In Kentucky, Clinton is expected to help Democratic nominee Jack Conway in his campaign against Tea Party favorite Rand Paul, who has faced criticism for comments he made about the Civil Rights Act, among other things.

Asher said that Clinton has the ability to speak to many regions of the country -- even solidly red or leaning-red states.

"He's not just going to go to urban areas," he said. "Coming here to Ohio, he can go to Cleveland just as readily as he could go to southeastern Ohio in the Appalachian area, and he'd be equally well received."

Jennifer Duffy, a senior editor for The Cook Political Report, said Clinton's appeal to moderates and independent voters will help boost confidence in Democrats. And that's certainly what Democratic leaders in Washington and their campaign organizations are hoping.

But a Washington Post/ABC News poll this week showed Americans are leery about whether Democrats are leading the country in the right direction.

The poll indicated that just 26 percent of registered voters said they will most likely support their current lawmaker in the House, with more than six in ten saying they may look for someone new to represent them in Congress.

A slim majority questioned in the poll said they would prefer GOP control of Congress so that the legislative branch would be able to keep in check the Democratic president. For likely voters, the margin of those preferring a Republican-controlled Congress jumped to 15 points.

And when it comes to the coveted independent voter, the news is not so great for Democrats. Forty percent of independent registered voters surveyed said if they were voting for Congress today, they'd choose the Democrat; 47 percent favored the Republican.

So can Clinton's efforts on the trail help reduce that gap? "I don't know if he can get them back," Duffy said. "But it's worth a try."

She added that while he can rally a rather lethargic Democratic base, it's unlikely he will be able to get the Obama surge voters -- independents, youth voters and minorities -- to go to the polls as they did in 2008.

While it's unlikely Clinton can transfer his popularity to individual candidates in local elections, Asher said he can help Americans recall the Clinton years as "very, very good" ones, when the country had a budget surplus -- and remind them of where the economy went during George W. Bush's administration.

"He can do a wonderful job in describing what Republican policies were -- what the Republican party wasted in terms after he left office."