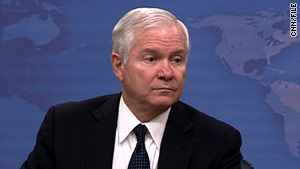 Washington (CNN) -- It is up to the Justice Department to determine if there will be criminal charges in the release of classified military documents by WikiLeaks, but Defense Secretary Robert Gates said Sunday the website is morally guilty for putting lives at risk.

On the ABC program "This Week," Gates declared himself "mortified" and "appalled" over the public dissemination of 76,000 documents that detailed military operations in Afghanistan.

"If I'm angry it is because I believe this information puts those in Afghanistan who have helped us at risk," Gates said, citing a Taliban statement that it would seek out informants and other collaborators exposed by the documents.

He said the issue involved two areas of culpability - legal and moral.

While the Department of Justice will decide on the legal questions, "there's also a moral culpability, and that's where I think WikiLeaks is guilty," Gates said.

Adm. Mike Mullen, the chairman of the Joint Chiefs of Staff, also cited the Taliban's threat to sources named in the leaked documents, saying the United States had a "moral obligation" to protect their safety.

However, neither Gates nor Mullen, who appeared on both the CBS program "Face the Nation" and the NBC program "Meet the Press," could cite a specific example of any Taliban attacks based on information from the leaked materials.

The public face of WikiLeaks, Julian Assange, says the purpose of posting the leaked documents was to increase awareness of the realities of the war within the American public.

Gates, however, complained that there was no accountability for WikiLeaks in making public the documents presumably leaked by military personnel. One suspect, Pfc. Bradley Manning, is in custody as part of what officials call a widening investigation.

Manning has already been charged with leaking a 2007 airstrike video and downloading documents from classified military systems.

The documents posted last week are divided into more than 100 categories and touch on everything from the hunt for al Qaeda leader Osama bin Laden to Afghan civilian deaths resulting from U.S. military actions.

Thousands of pages of reports document attacks on U.S. troops and their responses, relations between Americans in the field and their Afghan allies, intramural squabbles among Afghan civilians and security forces, and concerns about neighboring Pakistan's ties to the Taliban.

According to Gates, an effort by the military to provide up-to-date information to the frontlines helped ease the ability of the documents to get leaked.

"Had whoever did this tried to do this at a rear headquarters overseas or pretty much anywhere here in the United States, we had controls in place that would have allowed us to detect this," Gate said.

A change made for the wars in Iraq and Afghanistan to "put as much information as far forward as possible" made it "much easier to do in theater" than anywhere else.

However, Gates said he believed the benefit to soldiers in the field of having updated information probably outweighs the risk of a single soldier or a few leaking classified material.

"If one or a few members of the military did this, the notion that we would handicap our soldiers on the frontline by denying them this information ... my bias is against that," Gates said. "I want those kids out there to have all the information they can have."