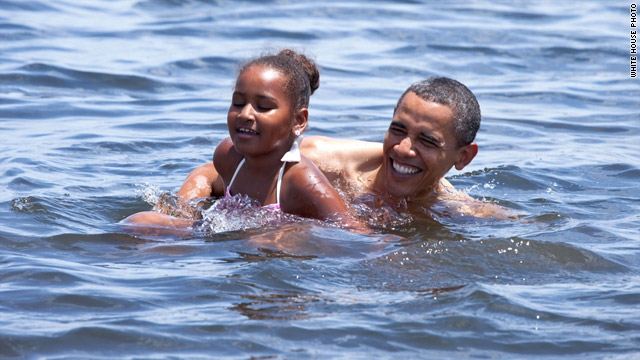 (CNN) -- The one really big question hanging over President Obama's weekend vacation to Panama City, Florida, now has an answer.

Will he or won't he dive into the water to send a message that the Gulf Coast is back?

The answer: He will, and sooner than expected.

"I think we're going to go tomorrow and as I just said Ed, I'm not going to let you guys take a picture of me with my shirt off," Obama jokingly told CNN Saturday. "You guys will tease me just like last time. I was on the front page ... People commenting."

But just hours later, a photo was published on the White House Flickr page showing a smiling President Obama and his daughter Sasha taking a dip in the Gulf waters off Alligator Point in Panama City Beach, Florida.

No reporters or press cameras were present for the swim, but the image will nonetheless send a message that the White House has sought to convey with the first family's trip: the Gulf Coast is open for business.

Obama caused a bit of a tabloid stir when he took off his shirt to reveal a muscular physique during trips to Hawaii during the 2008 presidential campaign and subsequent presidential transition. But some are less concerned about Obama ending up on magazine covers, and more worried about the White House sending the right message.

"Absolutely, I want him to take his shirt off and get in the water and show it's clean and safe," said Stephen Leatherman, a professor at Florida International University in Miami who puts together an annual list of America's best beaches.

Leatherman rates the beach there as one of the top 10 in the country, and he said Obama has a unique opportunity to showcase the fact that the Gulf Coast is still open for business despite the worst oil spill in American history.

"It's got lily-white sand, and frankly the oil didn't really make it there. It was pretty well spared," said Leatherman, who noted that the water is 87 or 88 degrees because of the steamy Florida weather, making it conducive to at least a quick presidential plunge.

"There is no better symbol than the president of the United States showing us the way," Leatherman said.

White House press secretary Robert Gibbs was cagey Friday when reporters asked whether the president will take a swim during the first family's 27-hour mini-vacation.

"Stay tuned," said Gibbs, who grew slightly impatient and a bit bemused about getting so many queries about something as seemingly minor as a presidential swim.

"Look, he's going to have some fun," Gibbs said. "Whether or not he gets in the water is up for clearly some debate. But, look, he will have an opportunity to enjoy ... the physical beauty of the Gulf and do some work at the same time."

Gibbs turned it around on reporters and wondered whether they would bare their midriffs this weekend.

"Are you bringing your suits?" Gibbs said with a smile.

But Leatherman suggested it's no joking matter because the president's decision to swim or not to swim will carry tremendous symbolic weight.

"I think it's very important that he gets into the water because I think there's this feeling that if you get in, you're going to get contaminated or get all kinds of diseases," he said.

This is the president's fifth trip to the Gulf region since the April 20 explosion that sparked the oil disaster. The trip is generating criticism over whether Obama is giving the region short shrift by spending only parts of Saturday and Sunday in Panama City.

White House officials announced the trip earlier this summer after critics wondered why the president and first lady had urged Americans to vacation in the Gulf but originally chose Bar Harbor, Maine, and Martha's Vineyard, Massachusetts, as the only locations for their own sojourns.

Now, the criticism has shifted to whether 27 hours in Panama City is too quick of a jaunt, and the Republican National Committee released a statement Friday that also said Obama has included Florida in only a couple of his trips to the region in recent months.

"It's nice to see the president take the time out of his busy schedule of golf games and campaign fundraisers to clear his conscience and visit Florida for only the second time since the oil crisis began," RNC spokeswoman Amanda Henneberg said. "As he meets with business owners in the Panhandle, it seems like the perfect opportunity for him to explain how his reckless spending, tax increases, and government takeover of health care are supposed to help the Gulf's devastated economy. Not even the Sunshine State can put a positive light on the president's failed liberal policies that have sunk his approval ratings to an all-time low."

Video: Obama: 'our job is not finished'
RELATED TOPICS

The president is accompanied by first lady Michelle Obama and their younger daughter Sasha. (The oldest, Malia, is still away at camp and will not be in Florida). Also making the trip is Gulf Coast recovery chief, Secretary of the Navy Ray Mabus, to try to show the administration is committed to a long-term turnaround.

Gibbs largely deflected questions about whether the trip was too short, saying the president is focused on promoting the "health of the region" with the vacation.

"Tourism in Florida and along the Gulf Coast is the economy," Gibbs told reporters Friday. "This is an opportunity to highlight the notion that this important region of the country is still doing well and open for business."

While Leatherman said he does think the trip seems too short, Obama should be applauded for carving out some time to help the region.

"I think it's basically a photo-op, isn't it?" said Leatherman. "But I still think it's a good thing for the president to come down and show the world that it's clean and safe. That will go a long way to helping the Gulf Coast."

Leatherman added: "The best thing that could happen is the president saying, 'I'm going in!' And I don't mean damn the torpedoes. I mean him saying, 'It's clean and safe, and I'm going in the water!' "