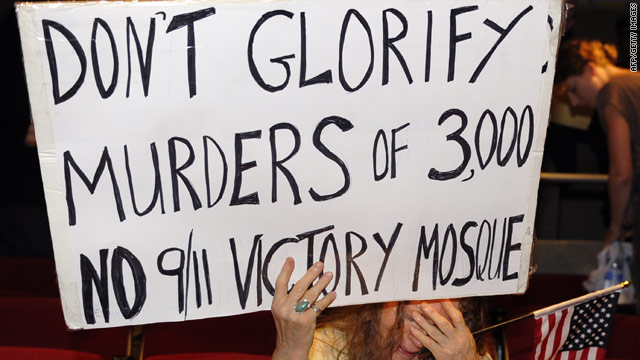 There has been anger and frustration over the construction of an Islamic Center near ground zero in Manhattan.
STORY HIGHLIGHTS
RELATED TOPICS

Washington (CNN) -- The current ruckus over building an Islamic center and mosque near ground zero, calls to change the 14th Amendment and other so-called "wedge" issues are roiling up each party's base, but they're turning off independents, analysts say.

"This is party politics as usual with respect to all of these wedge issues," said Jacqueline Salit, president of independentvoting.org, a national strategy and organizing center for independents. "I think there's more and more of a steady recognition that these kind of wedge issues and political manipulation, sensationalism and opportunism is exactly what is degrading the American political process and our democracy."

Salit, who is also the executive editor of The Neo-Independent magazine, said that people are having a hard time understanding what's happening with the economy because of partisanship.

"I think people can't tell what's going on because the political environment is so polluted by partisanship," she said. "The parties are trying to change the subject from things they think can inflame voters on and win elections on. How does that help the country? That hurts the country. And that's what independents are deeply concerned about."

Independents are increasingly concerned by both parties, and it's evident in recent polls.

A CNN/Opinion Research Corp. poll from late June found that nearly six in 10 independent voters said they are angry at both parties, with 4 percent angry only at the GOP and 6 percent mad only at Democrats. Just over three in 10 say they are not angry at either party.

Read more about the poll

Gallup Poll numbers from July indicate that while registered independent voters prefer Republican congressional candidates to Democratic ones, there is also some uncertainty.

"Currently about one in five independent registered voters are undecided or prefer a candidate from outside the two major parties, suggesting the potential for movement in these numbers between now and Election Day," according to Gallup's analysis. "The preferences of these voters, as well as which independents turn out on Election Day, will have a major impact on the direction and magnitude of seat change in the midterm elections."

Independent voters often side with Republicans on fiscal issues and Democrats on social issues. But with the economy as issue No. 1, appealing to the influential voting bloc will be essential for Democrats as the midterm election approaches.

Bringing up divisive issues that distract from fixing the country's economic woes will only create cracks in the bridge between the two major parties and independents, said Omar H. Ali, an independent voting analyst and professor at the University of North Carolina-Greensboro.

"Right now, there is a movement for nonpartisan reform in America and independents are leading that movement," Ali said. "In some ways, this issue with the mosque is the latest attempt of trying to gain partisan interest against the Democrats. ... But Democrats do the same thing to the Republicans [on other issues.]"

Independents, he said, are the watchdogs and "conscience of America" when it comes to issues like the economy. The blame game over who caused the economic recession only highlights what is wrong in American politics today, Ali said.

"Americans generally are very concerned about the economic state of the nation with rising unemployment and joblessness," he said. "Independents feel that way but they're much more attuned to the fact that economic downturn is connected to a poor political process, which keeps power concentrated in the hands of deeply partisan interests -- namely the two major parties."

While independents are generally turned off by partisan politics, they are not immune from weighing in on controversial issues.

Seventy percent of independents oppose the plan to build the Islamic center and mosque near ground zero, according to a recent CNN/Opinion Research Corp. poll. By contrast, 54 percent of Democrats and 82 percent of Republicans opposed the plan.

The same poll also found a clear partisan divide on changing the Reconstruction-era 14th Amendment, which guarantees equal protection of law and defines who is a U.S. citizen. Fifty-eight percent of Republicans support a change while 39 percent of Democrats do so. Independents are split 50-50.

Read more about the poll

But the issue that most independents are concerned about pertains to political reform.

"There's a lot of controversy, for example, around a whole set of political reform issues, which are the very things independents are concerned with -- like open primaries and nonpartisan elections," Salit said. "In state after state, independents are barred from voting in first-round primaries."

Ali said having nonpartisan elections, ballot access reform and referendums are essential things for independents like himself.

"These are structural issues that go to the heart of the process and independents for over a quarter century have been voicing their concerns."