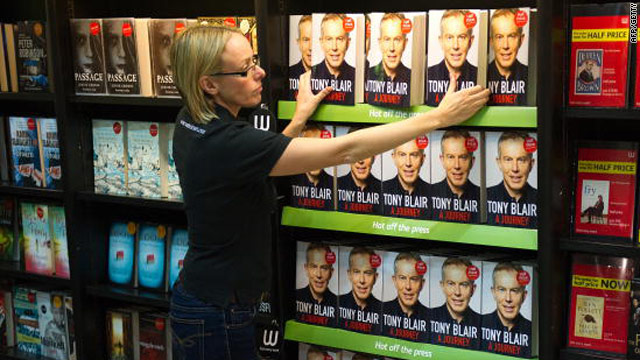 Detailing the close professional and personal relationship which developed between the two leaders in the wake of the 2001 terror attacks in the U.S. and during the build-up to the Iraq war in 2003, Blair writes that Bush was "very smart" while having "immense simplicity in how he saw the world."

"Right or wrong, it led to decisive leadership... he sincerely believed in spreading freedom and democracy," he writes in "A Journey;" which hit book stores in the UK on Wednesday.

But Blair, whose premiership overlapped the presidencies of Bush and Bill Clinton, reserves his warmest words for Bush's Democratic predecessor, describing him as a "political soulmate" and "the most formidable politician I had ever encountered." He also defends Clinton over the Monica Lewinsky affair.

By contrast, Blair describes an initially awkward relationship with Bush when the pair first met at Camp David in February 2001, disagreeing on most social issues as well as being "poles apart" on climate change.

"We got on well but fairly gingerly.... the fact remained he was conservative and I was progressive." But, Bush had a great sense of humor and was "self-effacing and self-deprecatory in an attractive way," Blair says.

Blair said the key to Bush's political success was his "appeal as a normal guy."

"You might not agree with him, but if you're a voter, you would never think you would be uncomfortable or feel inadequate if you met him socially; you would think he'd be nice and easy with you," he writes.

Bush had also displayed the most integrity of almost anyone he had met in politics, Blair says.

He [Dick Cheney] thought that the world had to be made anew, and that after September 11, it had to be done by force and with urgency. So he was for hard, hard power
--Tony Blair

"I was asked recently which of the political leaders I had met had most integrity. I listed George near the top. He had genuine integrity and as much political courage as any leader I ever met," he writes.

Blair laughs off as a "great 'George' moment" the episode in which Bush was caught on microphone greeting him with the expression "Yo, Blair!" at the 2006 G8 Summit in St. Petersburg, Russia. "It indicated total intimacy," he writes.

The 57-year-old, now a Middle East peace envoy, also rejects suggestions he committed the UK to backing an American-led invasion of Iraq as early as April 2002, when he visited Bush's ranch in Crawford, Texas.

"I made no such commitment -- in fact I emphasized the U.N. route," he writes. But he says he had "resolved in my own mind that removing Saddam (Hussein), would do the world, and most particularly the Iraqi people, a service.

"Though I knew regime change could not be our policy, I viewed a change with enthusiasm, not dismay," he says.

While Bush was persuaded of the merits of pursuing a further U.N. resolution over Iraq and the benefits of assembling a coalition ahead of an invasion, Blair says former U.S. Vice-President Dick Cheney was "unremittingly hard line."

"He thought that the world had to be made anew, and that after September 11, it had to be done by force and with urgency. So he was for hard, hard power," he writes.

Blair candidly admits he had more in common with Bill Clinton, praising his personal charisma and political skills, describing him as "a great guy, a good president, and above all a friend."

"We were political soulmates. We shared pretty much the same analysis of the weakness of progressive politics... We were both informal in style and young in outlook for our age."

Clinton was a "brilliant thinker... who would have shone at Prime Minister's Questions" -- the weekly session in which the British prime minister faces a grilling by lawmakers in the House of Commons.

But Clinton's greatest political strength was an "endless ability for rapport with ordinary people... and to be fascinated even by the most unfascinating people because he was always willing to learn from them."

Blair also suggests Clinton's affair with Lewinsky may have arisen in part from his "inordinate interest in and curiosity about people."

"In respect of men, it was expressed in friendship; in respect of women, there was potentially a sexual element. And in that, I doubt he is much different from most of the male population."