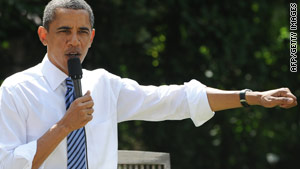 President Obama will lay out his economic proposal during an economic speech Wednesday in hard-hit Cleveland, Ohio.
STORY HIGHLIGHTS

(CNN) -- With less than two months to go until a critical midterm election likely to turn on the economy, President Obama this week will lay out a new plan that includes a proposal to extend a tax cut popular with the business community, according to an administration official.

The official said the president will push Congress to permanently extend the tax credit for business research and development costs.

That proposal will cost $100 billion and be paid for by closing other corporate tax breaks, according to the official.

Obama will lay out the proposal during an economic speech Wednesday in hard-hit Cleveland, Ohio, but the official stressed the business tax cut will not be the only part of the new plan. "This is a key element, but not the sum of our new proposals," the official said.

Administration officials previously told CNN the president is considering a payroll tax holiday as well as new infrastructure spending, among several proposals his economic team has been weighing.

There's urgency to the new plan in part because White House officials are anxious that Democrats' majorities in the House and Senate are up for grabs because of the economic uncertainty still sweeping the nation.

But administration officials privately acknowledge it's unclear whether House and Senate Democrats will be able to pass the president's new plan before the election because of the narrow window of a few weeks for Congressional action before lawmakers leave Washington again to focus full time on campaigning.

Even if Obama's plan does win passage, it is uncertain whether or not it would have a measurable economic impact before November. That's a worrisome development for Congressional Democrats already fretting that the president's 2009 stimulus package has not provided the originally-advertised bang for its buck.