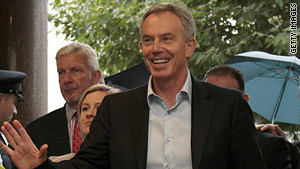 Tony Blair told ABC that at first he failed to grasp the reach of fundamentalist Islam.
STORY HIGHLIGHTS
RELATED TOPICS

(CNN) -- As the United States ended its combat mission in Iraq, former British Prime Minister Tony Blair, America's biggest ally at the outset of the war, said the decision to invade Iraq was a necessary one.

Sanctions against Saddam Hussein were being "watered down," and if the former Iraqi dictator hadn't been removed, there would've been other consequences, Blair said on ABC's "This Week."

However, Blair, whose memoir "A Journey" was released last week, wasn't without some regrets.

"You can't not have regrets about the lives lost," Blair said. "I mean, you would be inhuman if you didn't regret the death of so many extraordinary, brave and committed soldiers, of civilians that have died in Iraq, or die still now in Afghanistan. And of course you feel an enormous responsibility for that, not just regret."

Blair said that at first he failed to grasp the reach of fundamentalist Islam and the security implications of it. He compared the movement to revolutionary communism.

"It's the religious or cultural equivalent of it, and its roots are deep, its tentacles are -- are long, and its narrative about

Islam stretches far further than we think into even parts of mainstream opinion, who abhor the extremism, but sort of buy some of the rhetoric that goes with it," he said.

Speaking with host Christiane Amanpour, Blair also said that if he were in power today, he would not rule out using military force against Iran to keep them from developing nuclear weapons.

"I would tell them they can't have it, and if necessary, they will be confronted with stronger sanctions and diplomacy," Blair said. "But if that fails, I'm not taking any option off the table."

Amanpour asked Blair about a passage in his book about former President Bill Clinton. Referring to Clinton's scandal with Monica Lewinski, Blair wrote that the behavior came from a curiosity Clinton has about people.

"In respect of men, it was expressed in friendship. In respect of women, there was potentially a sexual element," Blair wrote.

Asked to expand on this passage, Blair hesitated and simply said, "part of his genius as a politician is that he is extraordinarily curious about people."