Obama children's book to be released in November 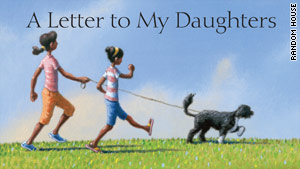 "Of Thee I Sing: A Letter to My Daughters" praises traits "that unite all Americans," Random House says.
STORY HIGHLIGHTS
RELATED TOPICS

Washington (CNN) -- America's author-in-chief is back.

President Obama has written a children's book titled "Of Thee I Sing: A Letter to My Daughters," according to a news release from Random House.

The illustrated book, according to Random House, is "a moving tribute to thirteen groundbreaking Americans and the ideals that have shaped our nation -- from the artistry of Georgia O'Keeffe, to the courage of Jackie Robinson, to the patriotism of George Washington."

It "celebrates the characteristics that unite all Americans -- the potential to pursue our dreams and forge our own paths," said Chip Gibson, head of Random House Children's Books.

The manuscript was completed before Obama took office in 2009, the news release stated.

Proceeds from the book, which has a suggested retail price of $17.99, will be donated to a scholarship fund for children of fallen and disabled soldiers.

Obama also wrote the international bestsellers "Dreams from My Father" and "The Audacity of Hope."