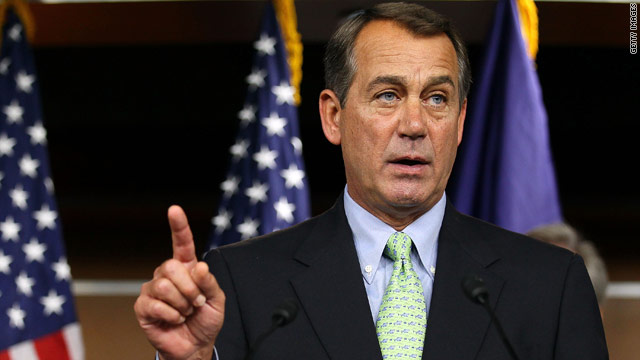 A Boehner aide says the Republican leader's speech will "focus on the issue of jobs, and how the November election will be a referendum on President Obama and Washington Democrats' job-killing record."
STORY HIGHLIGHTS

(CNN) -- House Republican Leader John Boehner thrashed Democrats' handling of the economy in a campaign speech from his hometown Friday, framing the midterm elections as a referendum on another two years of the same Democratic policies or a GOP he vowed would get people back to work.

The Ohio Republican, who is poised to be speaker of the House should the GOP regain control of that body, told a crowd of supporters, "This speech is about jobs, because this coming election is about jobs."

Responding to the crowd of supporters, cheering him on, Boehner yelled, "Hell no you don't!"

Dressed casually in a checked shirt and speaking in a campaign rally setting at a small manufacturing company in his hometown of West Chester, Boehner mocked the economic stimulus bill that passed the House without one House GOP vote, essentially saying 'I told you so.'

"That's what you got for your $787 billion worth of spending: High unemployment, a bigger government and an economy struggling to create jobs," Boehner said.

Even before Boehner took the podium in Ohio, congressional Democrats dismissed the minority leader's speech. A press release from Speaker Nancy Pelosi's office, responding to early excerpts, said the speech "demonstrates that when Republicans pledge to go back to the 'same exact' failed policies, their leader can only resort to empty rhetoric."

Mindful of the anti-Washington sentiment this election season, the small-business setting allowed Boehner to highlight his experience running a small plastics company in Ohio, rather than his 20 years in Washington. He maintained that Democratic policies threaten small businesses and that the American Dream is "under siege."

Repeating his call from earlier this summer, Boehner called for the president to fire his top economic advisors. "The pink slips shouldn't be going to workers here in Ohio. They should be going to the members of Barack Obama's economic team."

The Ohio Republican argued his party would listen and would change Congress, saying, "It starts with putting a new majority in charge of the United States Congress on November 2nd, and if we do we can send Speaker Nancy Pelosi and her allies all back home."

Doug Thornell, spokesman for Rep Chris Van Hollen of Maryland, who runs the House Democrats' campaign arm, pushed back at Boehner trying to cast himself as an anti-Washington reformer.

"For 20 years, John Boehner has been in Washington caddying for powerful corporate special interests and working against middle class families," Thornell said. "He rushed to support President Bush's Wall Street bailout, but when President Obama asked for his support for middle class tax cuts, help for small businesses and aid for those most in need, he turned his back."