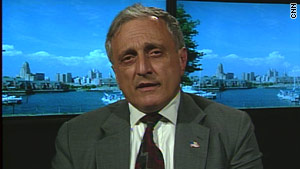 "I sadly, sadly have to withdraw from his campaign because I represent the Orthodox Jewish community in terms of family values," Rabbi Yehuda Levin told CNN, adding: "You can't compromise on this."

"My message today to the people of New York state, and people across the country, is there are standards and values and as much as it hurts me I have sadness for Mr. Paladino because I believe his heart is in the right place," Levin continued, adding that if Paladino does become governor, "I hope he straightens out."

CNN reached out to Paladino's campaign, but it had no statement in response to Levin's comments.

Paladino apologized Tuesday for comments "that may have offended the gay and lesbian community" after his remarks to an Orthodox Jewish group drew fire earlier this week. The Republican candidate had told the group he doesn't want children "to be brainwashed into thinking that homosexuality is an equally valid or successful option [compared with heterosexuality]. ... it isn't."

Andrew Cuomo, the New York attorney general and Paladino's Democratic opponent, criticized the remarks Sunday, as did advocate groups for gays and lesbians.

In a letter Tuesday, Paladino acknowledged that he made "mistakes" in his comments.

"I sincerely apologize for any comment that may have offended the gay and lesbian community or their family members," he said in the letter. "Any reference to branding an entire community based on a small representation of them is wrong."

Paladino said that if elected, he will fight for the rights of all New Yorkers.