Can Democrats and Republicans work together after the election? 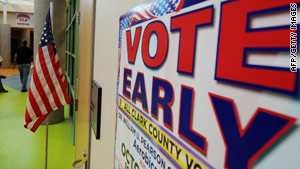 The voting on November 2 is expected to diminish Democratic majorities in both chambers.
STORY HIGHLIGHTS

Washington (CNN) -- Bipartisanship is in the eye of the beholder, it seems, as Democrats and Republicans ponder how cooperation between them can improve after the upcoming congressional elections.

The voting on November 2 is expected to diminish Democratic majorities in both chambers and perhaps cost them control of the House. Whatever the final tally, widespread voter dissatisfaction with the hostile political climate in Washington is evident.

Democrats blame Republican intransigence, calling the GOP a "party of no" that has opposed almost every initiative to undermine President Barack Obama's campaign pledge to change Washington politics.

Republican leaders say their opposition is a response to a left-leaning agenda pushed by Obama and Democratic leaders that far exceeds what the public wants.

In a new development this election cycle, the conservative Tea Party movement wants to throw out both parties, but its agenda aligns it with Republicans in the heated campaigning.

While Obama and some Democrats and Republicans say they hope for better relations after the election, they express different views of what that would mean.

"We're going to continue to reach out, and we're going to look for common ground and a way forward to solve the problems facing this country," White House senior adviser David Axelrod said Sunday on CNN's "State of the Union" program Sunday.

Axelrod predicted Democrats will keep their majorities in both chambers, but conceded that "Republicans will have more seats in Congress."

"We're hoping with that comes a greater sense of responsibility," he said.

Republican Sen. John Cornyn of Texas had a different take, telling "Fox News Sunday" that it is up to Obama to change, not Republicans.

"If the president's going to maintain his ideological stance and try to jam things through to support the left in America, when we're still a center-right country, then we're going to say 'no,' " Cornyn said, adding that Republicans will work with Obama on issues such as job creation, spending cuts and reducing the national debt.

"There is , I think, a fatigue on the part of the American people with the aggressive agenda that, frankly, they don't agree with, but they haven't been listened to," Cornyn said. "They've been lectured to, and they're tired of it. They're going to speak up on November 2nd."

Cornyn's Republican colleague, Sen. Lindsey Graham of South Carolina, agreed on the CBS program "Face the Nation" that Obama and Democratic leaders "over-reached" in the first two years, which he said rattled the American people.

"I don't think it's about everybody becoming a Republican in the last two years," Graham said of expected GOP election victories next month. "I do believe it's a rejection of an agenda that scares people. The health care bill, the stimulus package, the financial regulation, all the spending was not what people expected from this president."

At the same time, some bipartisanship will occur, Graham predicted.

"There will be a bipartisan effort to extend the Bush tax cuts and not let them expire" at the end of the year, Graham said. As Democratic candidates in swing states realize voters want middle-ground policies instead of a liberal agenda, more compromise will come, he said.

"I think we're going to have some bipartisanship when it comes to replacing the health care bill with a more moderate approach," Graham said. "You'll see some Democrats and Republicans working early on to try to moderate things."

According to Graham, the Tea Party movement has helped refocus the national political debate on a center-right agenda, but added that conservatives shouldn't get carried away.

Axelrod and White House Press Secretary Robert Gibbs outlined an agenda for the second half of Obama's presidential term that focuses on the nation's immediate and long-term economic welfare.

Gibbs told the NBC program "Meet the Press" that the president will work on strengthening the economy and trying to ensure its future stability, while continuing to push education reform and making sure that health care and Wall Street reforms are properly implemented.

Obama needs Democrats and Republicans to work together to deal with the federal debt, Gibbs said. A bipartisan debt commission is scheduled to report a set of proposals in December.

He made no mention of major issues such as immigration reform and energy reform, which Obama pushed strongly in his first two years. Axelrod, speaking on CNN, said both issues were part of the necessary foundation of reforms for sustainable economic growth in the future.

"I think that regardless of the outcome of election night that voters are going to want two political parties who may have different ideas but understand they have to come together and work together to solve our problems," Gibbs later told reporters.

However, other Democrats don't expect a new spirit of partisanship to emerge.

"It doesn't appear right now that the Republican Party is welcoming moderates any more," Missouri Sen. Claire McCaskill said of the effect of the Tea Party movement on GOP candidates.

"I think that independent voters need to take a hard look in these elections and realize that what we may be getting to is the kind of gridlock that, frankly, is not something that's desirable in terms of good policy in this country," McCaskill said on "Fox News Sunday.

Republicans "won't even pledge that they'll quit earmarking," she said, later adding: "If they won't even say they'll stop earmarking in this kind of spending problem that we're facing, I just think there's a lot of politics being played."