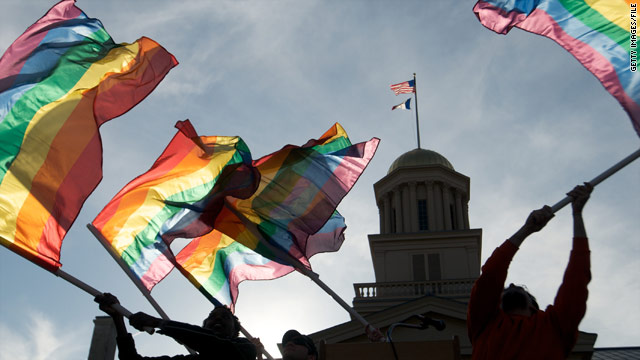 The vote marks the first time a member of the Iowa Supreme Court has been rejected by the voters under the current system that began in 1962.

Under the voting system in Iowa, each of the three justices up for retention -- Chief Justice Marsha Ternus, David Baker and Michael Streit -- needed simply to get more "yes" votes than "no" votes in the election to be elected for another eight-year term. They faced no opponents. None of the judges raised money for the campaign.

While all seven justices on the court ruled with Ternus, Baker and Streit, those three were the only ones whose seats were up for retention. None of them received the 50 percent "yes" vote needed to remain on the bench.

The outcome marks the end of a showdown in the state that was funded by several million dollars from mostly out-of-state groups opposed to the same-sex marriage ruling. The vote became very much a referendum on the issue and the ruling, rather than the judges themselves, analysts say.

The move was spearheaded primarily by Bob Vander Plaats, a Republican Sioux City attorney who lost the nomination for governor of the state and created the group Iowa For Freedom.

"Iowa law wisely allows for a check and balance of the Supreme Court through a retention vote by you, the citizens. In April of 2009, we all witnessed blatant judicial activism by the Iowa Supreme Court," the group's website said, referring to the decision by the court that Iowa's law restricting marriage to one man and one woman violated the state's constitution.

Although there wasn't much campaigning from the justices, some local officials began to throw support their way in an effort to help them keep their seats.

"If we allow political money to buy judicial retention elections, the quality of judiciary will be harmed and the perception of the judiciary will be diminished," the Iowa group Fair Courts For Us said on its website.

The group wrote on its site that a "special interest group" was "pouring money" into the race, when in the past three decades all of Iowa's judicial campaigns had "combined spending of $0."

So when Vander Plaats' group told voters it was "time to take a stand against the radical judicial activism of the Iowa Supreme Court," the Fair Courts for Us group did what it could to help.

And while the justices did not actively campaign to keep their seats, Ternus did give a speech last month that warned against the power of special interest groups -- like the groups that campaigned against the justices. "[They want] our judges to be servants of this group's ideology, rather than servants of the law." Ternus said, according to the Des Moines Register. "They simply refuse to accept that an impartial, legally sound and fair reading of the law can lead to an unpopular decision."

But Vander Plaats and his group said they were afraid that the legal precedent set for same-sex marriage could lead to the erosion of other freedoms -- and that was why voters needed to speak up.

"If the Iowa Supreme Court will do this to marriage, every one of our freedoms, including gun rights and private property, is in danger of being usurped by activist judges who are unelected officials," Vander Plaats' group says on its website.

On Election Day in Iowa, Des Moines Register columnist Rekha Basu went to the courthouse where the momentous decision came down.

"What I'd gone looking for was reassurance -- that, come today, the court could continue its business without worrying about voter backlashes; that justices who have done their jobs wouldn't lose them for upholding the constitution," Basu wrote.

She argued that the Iowa Supreme Court had a history of shattering walls and making precedents, and worried what it would mean for the future, and the past, if the current Iowa justices were rejected over a political issue.

"Our court was ahead of the nation's in upholding the right of women to practice law, and black people's right to public accommodations," she wrote. "What if all those justices had been turned out in revenge?"

The justices said little before and during the election. But after the results were announced, they jointly issued a statement.

"We wish to thank all of the Iowans who voted to retain us for another term. Your support shows that many Iowans value fair and impartial courts," they wrote. "We also want to acknowledge and thank all the Iowans, from across the political spectrum and from different walks of life, who worked tirelessly over the past few months to defend Iowa's high-caliber court system against an unprecedented attack by out-of-state special interest groups," the statement said.

"Finally, we hope Iowans will continue to support Iowa's merit selection system for appointing judges. This system helps ensure that judges base their decisions on the law and the Constitution and nothing else. Ultimately, however, the preservation of our state's fair and impartial courts will require more than the integrity and fortitude of individual judges, it will require the steadfast support of the people."

Iowa Supreme Court justices are appointed by the governor from a list of nominees chosen by a nominating commission, according to the court's website, and then face retention votes every eight years.