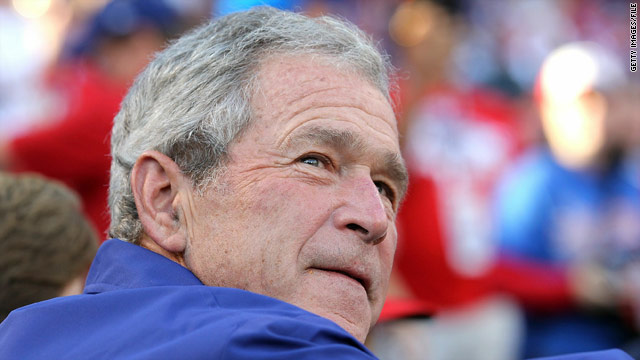 Washington (CNN) -- Former President George W. Bush has stayed out of politics since he left the White House and, except for his own career, he largely keeps the subject at arm's length in his new memoir, "Decision Points."

In an interview with Oprah Winfrey to air on Tuesday when the book is to be released, Bush said he is "through with politics" and refused to offer an opinion on the 2012 presidential election.

"I am not a political pundit. I'm really not," Bush said. "A lot is gonna happen between now and the nominating process."

He also passes on commenting on President Obama, saying he wants to treat his successor the way, "I'd like to have been treated."

"I don't think it's good for a former president to be out there opining on every darned issue," Bush told Winfrey. "He's got a plenty tough job. Trust me. And there's gonna be plenty of critics and he doesn't need me criticizing him."

In the 481-page book Bush compliments Obama's political skills during a meeting before the 2008 election as the financial crisis was coming to a head. He also criticizes the performance of his party's nominee, John McCain, in the same meeting.

He criticizes Senate Majority Leader Harry Reid for the failure of his efforts to reform immigration laws in 2006.

Bush takes responsibility for giving the go-ahead for waterboarding terror suspects, which has touched off a new round of criticism of Bush and calls for his prosecution. He says that he did decide not to use two more extreme interrogation methods, but did not disclose what those were.

Here are excerpts from the book, which CNN obtained on Friday:

'The choice between security and values was real'

Bush reveals the decision points that led him to choose waterboarding as an interrogation technique.

"CIA experts drew up a list of interrogation techniques. ... At my direction, Department of Justice and CIA lawyers conducted a careful legal review. The enhanced interrogation program complied with the Constitution and all applicable laws, including those that ban torture.

Though Bush confirms that he knew the use of waterboarding would one day become public, and acknowledges that it is "sensitive and controversial," he asserts that "the choice between security and values was real," and expresses firm confidence in his decision. "Had I not authorized waterboarding on senior al Qaeda leaders, I would have had to accept a greater risk that the country would be attacked. In the wake of 9/11, that was a risk I was unwilling to take," he writes.

Bush further declares that the new techniques proved effective, yielding information on al Qaeda's structure and operations, and leading to the capture of Ramzi bin al Shibh, the logistical planner of the 9/11 attacks who was captured on the first anniversary of 9/11.

The former president writes, "His understanding of Islam was that he had to resist interrogation only up to a certain point. Waterboarding was the technique that allowed him to reach that threshold, fulfill his religious duty, and then cooperate." Bush elaborates that Zubaydah gave him a direct instruction, "'You must do this for all the brothers.'"

Bush exposes his inner thoughts on what led him to reach this decision: "I thought about my meeting with Danny Pearl's widow, who was pregnant with his son when he was murdered. I thought about the 2,971 people stolen from their families by al Qaeda on 9/11. And I thought about my duty to protect my country from another act of terror.

The president's political education is rounded out with anecdotes from early races, including a loss to state Sen. Kent Hance in a bid for a West Texas congressional seat.

Despite warnings that he was likely to lose, Bush writes that he felt compelled to run.

"I was having my first experience with the political bug, and it was biting hard." Fighting off accusations that he was "an East Coast outsider," he tried to change the conversation by running an ad showing him jogging to emphasize his "energy and youth."

Hance quickly turned the ad against him with one simple line, "'The only time folks around here go running is when somebody's chasing them.'" The experience, he writes, taught him that he was capable of moving on after a loss, and to never let his opponent define him.

Bush writes candidly about the ups and downs of his father's presidential campaigns and the personal toll they took on him. On a fishing trip during his father's third year in the White House, Bush tells of a conversation in which President George H.W. Bush briefly toyed with the idea of not standing for re-election.

Bush writes that his father's doubts were attributed to blame he felt for the intense media scrutiny his son Neil had gone through during the savings and loan crisis. But the notion is quickly forgotten when in the next paragraph Bush describes his relief "when Dad told the family he had one last race in him."

In the summer of 1992, as the presidential race was heating up, Bush expressed concern that the campaign was languishing.

"I told Dad he ought to think about a bold move to shake up the dynamics of the race," Bush writes. "One possibility was to replace Vice President Dan Quayle, whom I liked and respected, with a new running mate." Bush's suggestion was Secretary of State Dick Cheney, and although his father dismissed the idea because it would look "desperate and embarrass Dan," Bush later admits that he "never completely gave up on my idea of a Bush-Cheney ticket."

The struggles of his father's campaign effected Bush emotionally. He confesses that he felt the media were treating his father unfairly, and on a last-minute campaign trip with his father in the days before the election, he "unleashed" an angry outburst on two reporters who asked about the mood on the campaign plane. "What the press did not understand was that my outbursts were driven by love, not politics," he writes.

After his father's loss in 1992, Bush says this love turned to "pain," and then ultimately to "the itch to run for office again," and a "sense of liberation," that he was out from under his father's shadow. "I could lay out my policies without having to defend his," Bush writes. "I wouldn't have to worry that my decisions would disrupt his presidency. I was free to run my own life."

Bush writes that the loss had a similar effect on his brother Jeb, "What had first seemed like the sad end to a great story now looked like the unlikely beginning of two new careers. Had dad won in 1992, I doubt I would have run for office in 1994, and I almost certainly would not have become president."

During the battle over passage of his 2008 "financial rescue package," Bush describes a heated White House meeting between congressional leaders and both presidential candidates. Despite warnings from several of his top advisers about the effectiveness of such a meeting, the president agreed to convene the group at John McCain's request for fear of the public message it would send if he rejected the suggestion of his party's nominee.

Bush describes the event as "the marquee event in Washington's political theater," and House Speaker Nancy Pelosi as "a volcano ready to erupt" prior to entering the Cabinet Room. Following remarks by the president and Treasury Secretary Hank Paulson, the speaker deferred to Obama, her party's nominee, whom Bush portrays as having a "calm demeanor" while speaking about the scope of the proposal.

From a political perspective, Bush says that Obama was "smart when he informed the gathering that he was in constant contact with Hank," giving the impression that he was "aware, in touch, and prepared to get a bill passed."

In a somewhat harsher description of his party's nominee, Bush recalls that he was "puzzled" with McCain's decision to pass when it came his turn to speak next. "He had called for this meeting," Bush writes. "I assumed he would come prepared to outline a way to get the bill passed." In Bush's telling, the meeting quickly devolved into a "verbal food fight, which would have been comical except the stakes were so high."

At one point during his push to get the legislation passed, Bush reached out to the late Democratic Sen. Ted Kennedy -- urging him to ask Reid to keep the Senate in session before the July 4 recess.

"Given the importance of this legislation, I thought it would be worthwhile to allow them a little extra for the bill to pass," Bush writes.

"Apparently, Harry Reid did not ... If Ted Kennedy couldn't persuade the majority leader of his party, my odds were not good."

And he was right. The Nevada Democrat called for a vote to end debate, which failed. The Senate then adjourned.

"Senators went home and listened to angry constituents stirred up by the loud voices on radio and TV," he writes. "By the time they came back to Washington, immigration reform was dead."

And because of that failure, Bush says "coyotes are still in business, immigrants continue to cross the border illegally, and a divisive political issue remains unsolved."