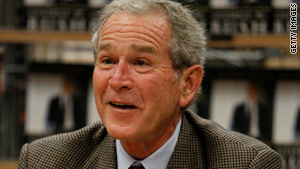 "It's going to be very hard to keep the trust of foreign leaders," the nation's 43rd president said of the documents on issues ranging from Iran to Honduras to Turkey. "If you have a conversation with a foreign leader and it ends up in a newspaper, you don't like it. I didn't like it."

A relaxed Bush was joined by Facebook CEO Mark Zuckerberg on stage in Palo Alto, California, with hundreds watching from the audience and up to 6,500 following the interview live online.

The president made it clear that pitching that memoir was his main reason for visiting the social network's office, saying, "you have got a lot of people paying attention, and I'm trying to sell books."

Should secret documents be made public?
RELATED TOPICS

Still, beyond hawking his 481-page memoir and pushing several initiatives from the George W. Bush Institute, Bush said he had no desire to intervene in day-to-day politics or be the center of the world's attention once again.

"I have no desire to generate publicity," said Bush, 64. "I've had enough of fame, and I want to go back to a life that is productive ... without generating the [limelight]."

Beyond passing references to current events, like calling South Korea a "force for peace," Bush focused on key moments from his time in the Oval Office from January 2001 to 2009. He offered anecdotes, talked about sports and even kidded with Zuckerberg, no stranger to the spotlight after this year's hit movie "The Social Network," which presented one version of Facebook's rise.

The president admitted personally using "the Facebook" since leaving office, pointing to his 600,000 online friends. And he playfully, though publicly, asked Zuckerberg to join him in a "joint venture" promoting public education -- in light of his initiatives at the Bush Institute and Zuckerberg's donation this fall of $100 million toward improving public schools in Newark, New Jersey.

As he has in other interviews, Bush stated his confidence that the decision to invade Iraq was just, predicting that Iraq will become a crucial hub of democracy in the Middle East. He said that promoting "freedom" -- be it personal, political, educational or economic -- will be central to his post-presidency life.

"We're involved in an ideological struggle that will eventually be won, as freedom prevails," Bush said.

While his standing has improved, a poll released this month shows that four in 10 Americans say Bush was a poor president, and another third rate him as average. Another 28 percent rated him as a good or as one of the greatest presidents ever, up from 20 percent when he left the Oval Office in January 2009.

The CNN/Opinion Research Corp. poll was conducted November 11-14, with 1,014 adult Americans questioned by telephone. The survey's overall sampling error is plus or minus 3 percentage points.

Bush said he won't criticize President Barack Obama, saying, "it's not good for the country ... [and] I don't want to." And Bush said he's learned, from his time as a business and political executive, how to handle criticism -- including when to ignore it and when to learn from others -- and come to grips with what others think of him.