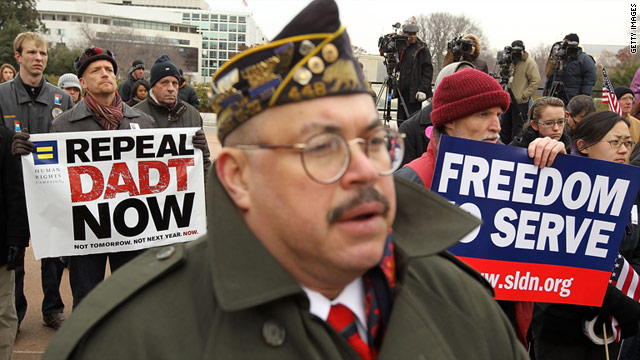 Washington (CNN) -- Four key GOP senators who have announced their support for a "don't ask, don't tell" repeal are prepared to join Democrats in voting to let the bill proceed, aides to the four said Friday.

The aides said Susan Collins, Olympia Snowe, Lisa Murkowski and Scott Brown will vote Saturday to end debate on the ban on openly gay and lesbian people in the military, regardless of whether the Senate passes a stopgap spending bill, a continuing resolution to keep the government funded.

The four have previously said that bill must be approved first.

The Senate is currently working to craft a temporary spending bill, made necessary after Democratic leadership pulled a $1 trillion spending bill after Republicans abandoned their support of it.

The four senators' support for the "don't ask, don't tell" repeal would ensure the 60 votes needed to clear the way for the bill to advance even if Joe Manchin, a West Virginia Democrat, votes against it, as is expected.

Sen. Joseph Lieberman, who co-sponsored legislation that would repeal the policy, said Friday that the four senators have "shown courage" in supporting the measure.

Lieberman said he believes that the Senate will have more than the 60 votes needed, adding that the bill's co-sponsors had worked closely with the Defense Department in crafting its language.

But Pentagon officials are warning gay and lesbian soldiers that the current law will temporarily remain in place, if the bill passes, as they review the legal technicalities of the repeal.

A guidance memo would be sent to military personnel informing them of the change, which would remain in effect for at least 60 days after it is signed into law, Pentagon spokesman Col. David Lapan said.

Conservative Republicans have argued that, among other things, a repeal would place an unreasonable burden on the military at a time when it is facing severe strains in Afghanistan and elsewhere.

The House of Representatives voted Wednesday to overturn the ban in a "standalone" measure not tied to any other legislative items.

The House had passed a repeal of the ban as part of a larger defense policy bill, but the measure stalled last week in the Senate.

Obama and Democratic leaders are trying to push through a repeal before the end of the current lame-duck congressional session.

The more conservative incoming Congress, which will be seated the first week of January, is considered far less likely to overturn the Clinton-era ban.