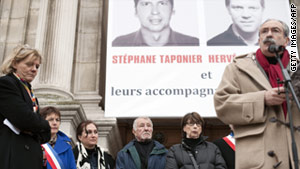 (CNN) -- Fifty-seven journalists were killed around the world in 2010 as a consequence of their work, according to a report released Thursday by the international group Reporters Without Borders.

The most dangerous continent for members of the media was Asia, where 20 journalists lost their lives. The deadliest country: Pakistan, where 11 journalists were killed, the group said.

Journalists were most likely to be kidnapped in Afghanistan and Nigeria.

Journalists "are seen less and less as outside observers," the report concluded. "Their neutrality and the nature of their work are no longer respected."

Reporters are also "turning into bargaining chips," the report noted. "Kidnappers take hostages in order to finance their criminal activities, make governments comply with their demands, and send a message to the public. Abduction provides them with a form of publicity."

The report warns that media coverage of critical regions is at risk of being reduced if local governments fail to do more to prevent abductions.

There were 1,374 incidents in which journalists were attacked or threatened in 2010, and 535 cases of arrest.

A total of 127 journalists from 23 countries went into self-imposed exile in order to escape political oppression and violence in 2010, the report says. Iran topped the list of countries from which journalists fled, with a total of 30 cases reported.