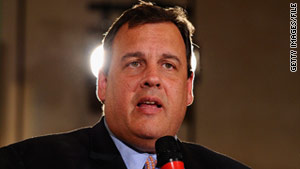 New Jersey Gov. Chris Christie says he was constantly in touch from Florida during the storm.
STORY HIGHLIGHTS
RELATED TOPICS

(CNN) -- New Jersey Gov. Chris Christie blasted Democratic political opponents Friday for criticizing his absence from the state during the snowstorm that pounded the Northeast over the Christmas holiday.

He also took a shot at the media for giving what he characterized as excessive attention to the controversy during what is typically a slow news week.

Both Christie and Lt. Gov. Kim Guadagno, first-term Republicans, were away on vacation during the storm, which dumped up to three feet of snow throughout the region.

Some top Democrats, in turn, questioned why the state legislature had bothered to create an office of lieutenant governor in 2005.

Christie, who returned to New Jersey on Thursday, said the state had competent leadership during his absence. He said he would not break a long-held promise to his children to bring them to Disney World over the holiday and noted that Guadagno had made plans months before to take a two-week cruise with her severely ill father.

"My first and most important responsibility, in my view, is as a husband and a father," Christie said.

"I think I made that pretty clear to the people of New Jersey when I was running. ... And I was not going to rescind my child's Christmas gift, especially when I was convinced that we had a plan in place."

Christie also said he had constantly been in touch from Florida during the storm.

"This is not like in the 1800s when, you know, nobody would be able to get me," he said. "Believe me, my cell phone was ringing ... much more than I would have preferred it to under normal circumstances when I'm away on a family vacation."

There is "able leadership in the executive branch of this government, (and) I was talking to them on a regular basis."

"All this carping and craziness" about leaving the state "stranded" is "just partisanship," Christie argued.

Democratic critics in the state legislature "took shots ... without knowing the full story." They should "learn this is a responsible government."

Noting the massive media coverage of the storm, the governor dismissed it as a reflection of "the nature of the time of the year."

"All you guys" in the press "would be doing this time of year, absent a disaster, would be retrospectives on what happened in 2010. So you got a disaster to fill the week, and so people want to talk about that," he said.

Christie emphatically declared, however, that he was not bothered by the criticism.

It "just rolls off my back. It's what I expect," he concluded. "If you're going to let that kind of stuff bother you in this job, then you're not going to last very long in it, and I intend to last in it for quite some time."