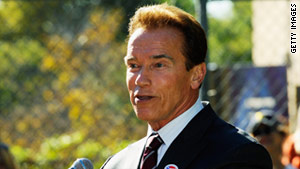 Washington (CNN) -- Beginning Saturday and continuing over the next few weeks, some of the nation's most prominent governors will be leaving office as a new crop of state chief executives are sworn in.

Among the more well-known governors who will be leaving office:

Some of them are leaving due to term limits, some were defeated and others sought different offices. Some are leaving after having survived high-profile scandals. Others are departing after weathering a myriad of problems affecting their states.

David Paterson, Jennifer Granholm and Bill Richardson will be the first to leave office when their successors are sworn in on Saturday.

Richardson told CNN he is going to stay in Santa Fe, New Mexico, and looks forward to becoming a private citizen after having served as a governor, a cabinet secretary, a United Nations ambassador and a congressman.

"I'm going to try to set up a foreign policy institute where I continue my work on peacemaking, on rescuing hostages, on U.S.-Latin American relations. I'm going to stay active," Richardson told CNN's "John King USA" program on Thursday. "I'm going to be around -- not in New Mexico politics but more at a national and hopefully international level. But you know I need a pause, the people in New Mexico need a pause from me, probably the country needs a pause from me."

Birthers, the story that won't go away

Having just returned from a trip to North Korea to help calm recent tensions, Richardson said he intends to stay involved in that issue and other foreign policy matters but doesn't rule out returning to Washington one day.

Schwarzenegger's last day in office is next Monday. It has been a roller coaster for the actor turned politician. After first winning office following the recall of his predecessor, Gray Davis, in 2003, he promised a new approach.

While his supporters point to major environmental and political reforms in the state, his popularity plummeted as the state's fiscal problems mounted. California confronted major deficits and financial headaches as Schwarzenegger and legislators faced off trying to find solutions to deal with the red ink.

In an interview in November on NBC's "Tonight Show," Schwarzenegger said he did not have regrets about his decision to run.

"It was one of the greatest decisions I ever made because working for the people of California is really was a great pleasure for me, it was a great honor. It was very rewarding to make some of the decisions that had to be made, and we really moved the state forward," he told host Jay Leno.

While detractors such as some of the state's labor unions have criticized some of the decisions he has made, Schwarzenegger pointed to some of his accomplishments.

"I am very happy I became the reform governor, that we reformed workers compensation, that we reformed the primary -- open primaries so that we bring both of the parties closer together," he said. "I am very happy we took the power away from the legislators and from the lawmakers, the power to draw the district lines...also all of the environmental laws," such as ones to reduce greenhouse gases and to encourage alternative energy sources.

But he also acknowledged some of the financial problems facing the Golden State with declarations of fiscal emergencies and several rounds of major spending cuts to popular programs.

"I have to say that I am sad that we had a second in my term, a second decline economically, because no matter how much I brag about what we have accomplished it is horrible when you see so many people unemployed. Suddenly people losing their jobs. So many people suffering."

On Monday, former governor Jerry Brown, a Democrat, will once again take the helm of the state as it faces a growing budget gap. It is now estimated its deficit will be $28 billion over the next 18 months. Even before taking office, Brown has been meeting with state officials and legislators to help find ways of dealing with it.

The most scandal-ridden governor to be leaving office now is South Carolina's Mark Sanford, whose fiscal conservative credentials were helping to propel his career.

However, last year he admitted lying to his staff when he told them he had gone on a hiking trip on the Appalachian Trail. Instead, it turned into a political crisis.

Before a painful press conference at the state capitol, he went into detail about how he had ventured to Argentina for a rendezvous with a mistress. Eventually his wife, Jenny, divorced him. Despite calls for his resignation and impeachment inquiries, Sanford persisted and stayed in office.

Before Sanford's last day on January 12, he is scheduled to tour parts of the state to extend thanks to his supporters.

In an interview with CNN affiliate WCBD in Charleston, Sanford said one of the things he was most proud in his eight years as governor was bringing some fiscal discipline to the state.

One incident of his gubernatorial career will certainly stand out: in 2004 he brought some live pigs into the state house after some of his budget vetoes were overturned, to protest what he considered pork barrel spending. He eventually got his way.

"It went to the core of whether we have a balanced budget requirement in the state," he said.

He told the station in the time since his affair became public it has been a time of some accomplishment for the state.

"If you look at these last 18 months they have been surprisingly productive," he said, pointing to some vetoes of bills amounting to savings of about $260 million.

Sanford will be succeeded by Republican state legislator Nikki Haley, a rising star in the GOP.