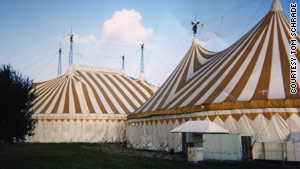 Several tents formerly belonging to Cirque du Soleil are on the way to Haiti to be used as government headquarters.

(CNN) -- Several large circus tents previously used by Cirque du Soleil are on their way to Haiti to be used as a temporary headquarters for the Port-au-Prince government, according to the man donating them.

An urgent effort is under way to provide shelter for in Haiti, ahead of the rainy season expected to hit the island nation at the end of March.

Much of the government is operating in small tents or cramped quarters in buildings that survived the January 12 earthquake.

Schrade, who bought the tents after Cirque du Soleil retired them, said his wife got the idea to donate them while they were watching coverage of Haiti relief efforts.

"It seemed like a good thing to do," Schrade said.

"Even the shipping containers can serve as apartments," Schrade said.

After an aide to the Port-au-Prince mayor confirmed the government would welcome the tents, Schrade said he called Barron Hilton -- the son of Hilton hotel founder Conrad Hilton -- for help in getting them from storage in Reno, Nevada, to Haiti.

Gregory Anderson, the international project manager for the Hilton Foundation, confirmed its participation.

The William J. Clinton Foundation -- the former U.S. president's nonprofit group -- will coordinate getting the big tents to Port-au-Prince, he said.

A convoy of tractor-trailer trucks left Reno Monday night with the tents bound for the port of Miami, Florida, he said. They'll be loaded onto a ship chartered by the Clinton Foundation next week for the voyage to Port-au-Prince, he said.

Technicians hired by Schrade will travel there to supervise the set up, he said.

The tents, which initially cost about $5 million, were first used by Cirque du Soleil at the Mirage Hotel in Las Vegas a decade ago. They also spent time at a Myrtle Beach, South Carolina, theme park before Schrade bought them with the idea of using them at a Reno hotel, he said.

The economic downturn derailed Schrade's plan to use the tents at a hotel in Reno, he said.

Cirque du Soleil is a Canadian-based traveling circus based on street performance art.