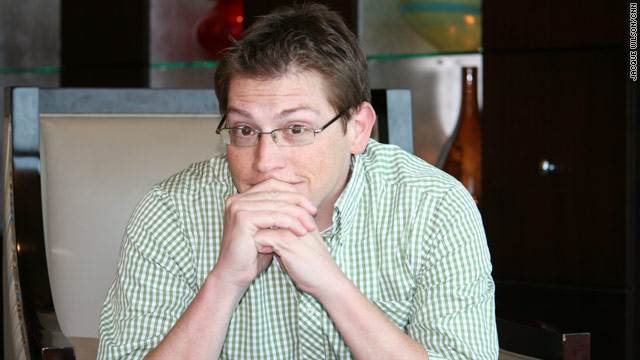 Seth Grahame-Smith, along with his editor at Quirk Books, kicked off the mash-up genre with "Pride and Prejudice and Zombies."
STORY HIGHLIGHTS
RELATED TOPICS

(CNN) -- In the past year, Seth Grahame-Smith has gone from writing on nights and weekends, hoping his books break even, to becoming a best-selling author with two movies in the works.

What changed? Adding the undead.

The films are both based on his mash-up novels, "Pride and Prejudice and Zombies," and his latest, "Abraham Lincoln: Vampire Hunter."

His editor, Jason Rekulak at Quirk Books in Philadelphia, Pennsylvania, came up with the title for the grandfather of the mash-up genre, "Pride and Prejudice and Zombies," and Grahame-Smith ran with it.

His success has not only caught the attention of the film industry, but it's also inspired a sea of imitators. There's "Android Karenina," "Jane Slayre" and "Pride and Prejudice and Zombies: Dawn of the Dreadfuls" headed to a bookstore near you.

The author spoke with CNN about how he turned Honest Abe into an ax-wielding president, his vision for bringing him to the silver screen and why actress Natalie Portman has the makings of a perfect 19th-century zombie killer. The following is an edited version of the interview.

CNN: What gave you the idea to put zombies in Jane Austen in the first place?

Seth Grahame-Smith: My editor had these five words ["Pride and Prejudice and Zombies"]. It was one of those ideas where you think, why hasn't someone done this already? It was exciting because I knew it could be funny and ridiculous, but still a challenge to get the language right.

CNN: Did you have any idea that the book would take off the way it has?

Grahame-Smith: I thought it was going to be like the first four books [I wrote] that kind of limped their way to breaking even.

The first printing of the book was only 10,000 copies, which was pretty standard for how my books had been selling. Then we started getting traction on the blogosphere last February, and we printed an additional 5,000 copies. That 15,000 sold out in less than a day. It's sold more than a million copies in less than a year.

CNN: Why do you think PPZ resonated with so many readers?

CNN: And then came the imitators.

Grahame-Smith: There have been so many attempts at mash-ups in the past year.

People don't seem to understand that the mash-up isn't arbitrary. We're not putting folded pieces of paper into two hats and then pulling out Emily Bronte with one hand and werewolves with the other. It has to work on both a superficial, fun level, and it has to work on a thematic level and for the characters.

In PPZ, the book is about repression and the role of women in Jane Austen's regency era, so I'm taking those same themes and giving them scope. The repression of women becomes "women aren't the best zombie slayers; men are." Or, the class system that's in the original book is portrayed through, "your training isn't as good as my training in the deadly arts."

CNN: So why pair Abe Lincoln with vampires?

Grahame-Smith: While I was in the process of writing PPZ, I noticed on the table at every bookstore were Lincoln books because of the bicentennial. And then, lo and behold, there would inevitably be a "Twilight"/vampire table. I had that Reese's peanut butter cup moment, where there are these two great flavors that people couldn't get enough of.

When I started to research Lincoln's life, I was surprised by how gothic and macabre his life was. I couldn't believe that there were all those opportunities there for vampires. I realized it would work as a book when I realized that vampirism and slavery were doing the same thing -- stealing lives and the blood of other people to enrich their own lives and further their own means, so it made sense to me that these two would be in leagues with each other.

CNN: Both of the books are being made into films. What are you envisioning?

Grahame-Smith: For "Pride and Prejudice and Zombies," that's up to [director] David O. Russell. But in my head, I'm seeing the same thing that I saw when I was writing, which was this beautiful, Regency-period movie with sequences of sheer terror and aristocrats flying around like they're in "Crouching Tiger, Hidden Dragon."

CNN: What about for "Abraham Lincoln: Vampire Hunter?"

Grahame-Smith: It's incredibly fun for me to be translating this into a movie and working with people like Tim Burton. I think Abe is going to have that same gothic, period feel as PPZ, but I can tell you that the action sequences are going to be extremely modern, like the action sequences in "Wanted."

CNN: Vampire movies are incredibly popular right now. Ever worry that "Twilight" fans are going to wander into "Abraham Lincoln: Vampire Hunter" and be confused?

Grahame-Smith: I haven't seen any of the "Twilight" movies or read any of the books, and people constantly ask me if my vampires sparkle, and I say, absolutely not. I'm not a sparkly-vampire guy. My goal is to make vampires the bad guys again.

CNN: Who's going to get to play Abraham Lincoln?

Grahame-Smith: We haven't talked about casting yet. I can't even say who would play him in my dream scenario. Whenever I picture the movie, it was just like what I was picturing when I was writing the book. I picture Abe; I don't picture an actor.

For PPZ, Natalie Portman is the perfect fit, because she's got the acting chops and the experience in doing big, effects-driven movies. She's incredibly smart and she's incredibly beautiful. I think she has the charisma and potential badass qualities to pull off the role.

CNN: Your life has changed completely in the past year. What would you say to those who see you and think, "I could do that?"

Grahame-Smith: I always say to people, I was writing nights and weekends for 10 years before I wrote PPZ. There were many times in that decade where it would've been easy to say, I'm not getting anywhere, forget it, but because I kept at it, I was still working when that lucky idea came my way. You have to put your time in, and you have to be persistent. Nobody's going to discover you unless you're right there waiting to be discovered.