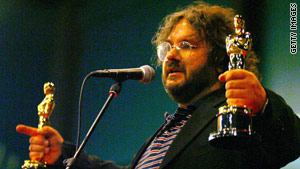 (CNN) -- Peter Jackson, the Oscar-winning writer and director of "The Lord of the Rings" trilogy, was knighted in his native New Zealand.

The knighthood was conferred on Jackson on Wednesday for his services to film at a ceremony at the Premier House in Wellington.

"The Lord Of The Rings" trilogy, which won 17 Academy Awards, including best director, adapted screenplay and best picture for Jackson for the final chapter, "The Return of the King," was largely filmed in New Zealand and showcased the country's natural scenery. The project broke box-office records around the world and prompted a spike in tourism to New Zealand.

Jackson grew up in Pukerua Bay on the North Island of the country.

Jackson is currently working with Mexican director Guillermo del Toro on "The Hobbit," a two-movie prequel to "The Lord of the Rings." "The Hobbit" is based on a book by author J.R.R. Tolkien.