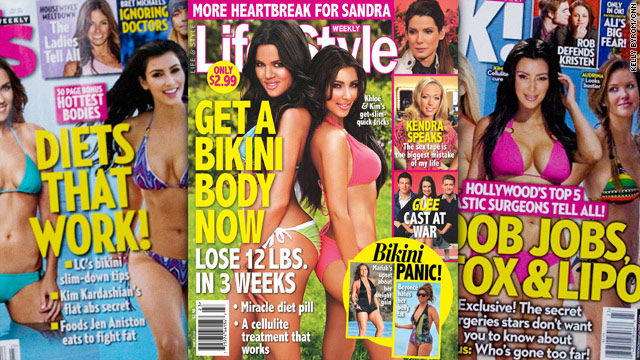 The Kardashian sisters are no strangers to magazine covers, many of which emphasize how they keep their physical figures.
STORY HIGHLIGHTS
RELATED TOPICS

(CNN) -- The Kardashian sisters -- Kourtney, Kim and Khloe -- are no strangers to celebrity magazines. Try and find a week where one of them isn't a cover headline on one of the tabloids.

The reality TV stars are such mainstays on celebrity weeklies, alerting the public of discord within the family and marital ups and downs, that the kneejerk response of many is, "Why are they getting all this attention again?"

But in addition to dishing on their own family drama, the sisters Kardashian have recently been making the rounds sharing their "bikini body secrets." Kim and Khloe appear on the May 28 cover of Life & Style posing next to a bright yellow cover line that screams, "Get A Bikini Body Now." Kim also appears on the front of Shape magazine this month alongside the quote, "I'll never be one of those skinny girls; so what?"

Could it be that, somewhere between the second season of "Keeping up with the Kardashians" and their fifth "bikini body" magazine cover story, the trio has shown that we've arrived at a new physical ideal? Although the definitions of "thin" and "curvy" or "full-figured" are subjective, the sisters are upheld as atypical from the Hollywood norm that celebrates a more narrow physique.

"I do think that overall, women are a little bit tired of the cookie cutter Hollywood ideal," said Shape Editor-in-Chief Valerie Latona. "The fact that these girls have curves and they're not perfect -- Kim admits to having cellulite and she's curvy -- it resonates with women."

For those unaware, there's been a typical standard of beauty dominant in the media for decades, said Tina Pieraccini, professor of communications at State University of New York at Oswego.

"Beginning in the late 1960s, there was pervasively a single standard of beauty which was increasingly thin; that was the standard by which society judged beauty. Even now, it's tall, thin, blond, [and] blue-eyed," Pieraccini said.

This becomes damaging when there's no other option aside from that standard, she added, because how many of us can be tall, thin, blond and blue-eyed? In that regard, a wide acceptance of the Kardashian sisters is clearly a good thing: The more variety of what's considered a body ideal, the better. And, as proven by the influx of magazine covers, the readers are accepting.

"To be a successful cover star, particularly with body subjects, you have to be a likeable star, and they also have to have a body the readers want to attain," said Dan Wakeford, editor-in-chief of Life & Style Weekly. Covers that feature quotes such as "I have cellulite; so what?" are part of what makes the Kardashians relatable, and as a result, their physiques seem more attainable, Wakeford said.

"They're not doing crazy, extreme diets and they're really, really likeable. The fact that they are relatable and the fact that they don't have a talent such as singing and acting per se helps, because the readers feel they can attain the level of fame and the glamorous life that these girls live," Wakeford said.

The relatability of Kim Kardashian is also what appealed to Latona. At first, Latona said, she wasn't on board with a Kardashian cover, because all three sisters are spokeswomen for Quick Trim, a supplement taken to aid in weight loss.

"To be honest, that was my first reaction, 'doesn't she sponsor diet pills?' " said Latona, who expands more on this question in a blog post. "But, when I was younger, I tried diet pills and it didn't work for me. People try different things to find the right balance for themselves, and she said she takes them because they help her sweet tooth. We don't endorse them, but people do try them. That's very real to me."

Latona doesn't see the cover as a step in a new direction, but rather as tapping into what people want to know more about. Former "The Hills" star Lauren Conrad has also been on the cover of Shape, Latona pointed out.

"These reality stars are not to be ignored. They're here, they're very popular and people want to know about them," Latona said. "Reality stars seem more real to women than Hollywood actresses. [Kardashian's] not a stick-thin Hollywood type, and she works out really hard."

Pieraccini agreed that it's the sisters' pseudo-accessibility that makes them popular choices for health and fitness cover stories, but said she hopes that theirs will be just one among many different physiques to aspire to.

"The potential harm in that would be is that if their body image or shape becomes the single standard for what is ideal. Rather than young girls wanting to be thin, now you have them say, oh I have to get breast implants, or butt [augmentation]," Pieraccini added. "I like the fact that they're more curvaceous and fuller-figured, but they need to be part of a balance and a mix."