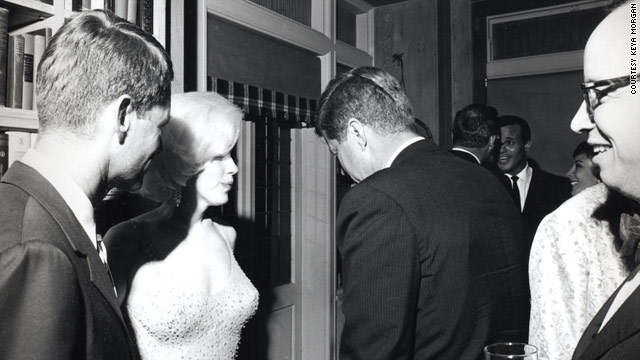 Tuesday, which would have been Monroe's 84th birthday, marked the public debut of a rare image of Monroe with Kennedy and his brother Robert F. Kennedy together after the May 19, 1962, party.

President Kennedy appears to be turning away from the camera, something he rarely did, while his brother, the U.S. attorney general, looks toward them.

Stoughton, who sold the prints to Morgan a year before his death in 2008, told him agents missed one negative in their search, he said.

"The Secret Service came in when he was developing the negatives and basically confiscated all the ones of Jack, Bobby with Marilyn," Morgan said. "The only one that survived is the one that was in the dryer."

Historian Arthur Schlesinger Jr., who was an aide to President Kennedy, appears in the photo holding a drink and cigar and wearing a broad smile. Schlesinger's personal journal, published in 2007, included his impression of Monroe at the private gathering.

"The image of this exquisite, beguiling and desperate girl will always stay with me," Schlesinger wrote. "I do not think I have seen anyone so beautiful; I was enchanted by her manner and her wit, at once so masked, so ingenuous and so penetrating."

He wrote that Robert Kennedy was paying great attention to Monroe at the gathering, which was at the Manhattan home of Arthur and Matilda Krim.

"Bobby and I engaged in mock competition for her; she was most agreeable to him and pleasant to me, but one never felt her to be wholly engaged," Schlesinger wrote in a passage included in his book "Journals: 1952-2000."

While the relationship between the Kennedy brothers and Monroe has become a documented part of history, photographer Stoughton was reluctant to allow the image to become public until after former first lady Jacqueline Kennedy's death in 1994.

Morgan said he bought access to the negative while working on an upcoming documentary about the actress's death, "Marilyn Monroe: Murder on Fifth Helena Drive."

Stoughton, in interviews for the film, told Morgan the story behind the first lady's refusal to attend her husband's birthday gala.

"He's the one who told Jackie that Marilyn was going to be at the celebration, and her exact words were 'Screw Jack,' and she left the room and she did not go to the famous celebration," Morgan said.

Morgan's prints show details not clear in low-resolution, cropped copies that made their way onto the internet after the photo was licensed for a book about Monroe in 2004.

Singer Harry Belafonte is seen in the background with his wife, talking to a man that Stoughton told Morgan was comedian Jack Benny.

Beverly Hills art appraiser David W. Streets, who reviewed the prints and their history for CNN, called them "the real McCoy."

"This is a very significant piece of American and celebrity history, of fine art photography," Streets said.

Since Stoughton was a U.S. Army captain and was using a government-owned camera and film, the images themselves are in the public domain. But access to the negative, which Stoughton secretly kept, was valuable, Streets said.

Stoughton made and signed 10 prints for Morgan, 30 inches by 30 inches. Nine of them go on sale Tuesday at the Art & Artifact Gallery in West Hollywood, California.

The 10th print was given to singer Michael Jackson two years ago, Morgan said. Morgan was a friend of the pop star's, who was a big Monroe fan.