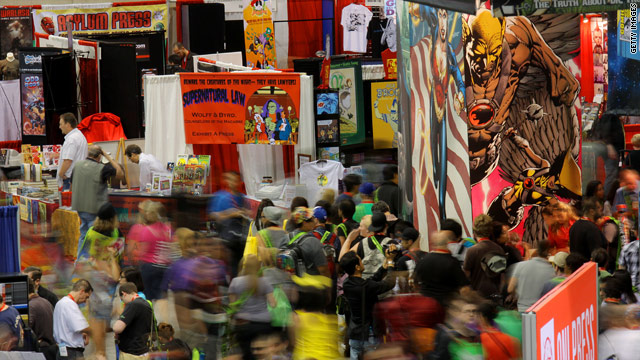 (CNN) -- Everyone from "Twilight Moms" to "Family Guy" fans is waiting in line at Comic-Con. This nearly 40-year-old convention is mainly devoted to comic books, and it was sold out before the exhibitors and speakers were even announced this year. Why are so many people there?

In 2009, Diamond Comics, one of the world's largest comic book, graphic novel and merchandise distributors, sent out 79 million comic books and 15 million graphic novels to stores.

It's not only geeky, teenage boys reading the comics. Buyers include include teenage girls, college students and professionals in their 40s, comic book store owners and industry experts say.

"I started collecting comic books when I was a little kid, maybe 12 years old. I went into an old-timey drug store -- it still had a counter that had a malt shop --and back in the back it had a rack of comics," he said. "I remember buying three comics, all Marvel. "Fantastic Four," "Captain America," and "Spiderman," and I fell in love with them."

"The Sunday paper was literally wrapped in funnies to get people to buy that newspaper as opposed to the competition," he said. "The comic strips were so popular that two salesmen had the idea to repackage them."

After the success of Action Comics No.1, which was the first appearance of Superman -- and a failed comic strip, Richardson pointed out -- a flood of copycat superhero comic books appeared.

"For many years comics were taken as children's entertainment," Richardson said. "But we've seen the graying of the comic book audience. Because we have an older clientele, the subject matter has matured. There was a poll done recently that said comic readers are more likely to be in their mid 20s than 12 or younger."

Even the art in comic books -- a major appeal of the medium -- is more mature, he said. Comic books also have seen a shift in storylines and characters.

"[Women comic book characters are] positive role models -- strong women, confident women, women with great careers," Loewnau said. "Pepper Potts from 'Iron Man' is a great example of that. Tony Stark couldn't run the company without her. And then there's also the great clothing, the costumes. It's not just the woman in the bathing suit anymore."

Video: 'The Hoff,' Shatner and more

Video: Who's creating the buzz?

When a mainstream writer writes a comic book, people want to check it out, he said.

In Japan, people have enjoyed comics since the time of Emperor Meji. These days, it is not uncommon to see businessmen, grandmothers and school children all reading comic books on subways and trains.

Yoshimura Kazuma, the chief researcher of the Manga Museum in Kyoto, Japan, said the cartoon form is appealing because it offers a "more unique expression than a movie or a novel."

The "transformation, exaggeration and omissions" that the images in comics make convey information on multiple levels, and is similar to the way Chinese writing is ideographic script, he said. (In Japanese kanji, for example, the idea or image of the word is often included in the shape of the word's symbol.)

The equivalent of a comic book in Japan is called "manga." Manga is a mainstay of Japanese publishing, taking the form of magazines or even small paperback books. These printed cartoons follow a similar structure to American comic books, but have evolved to appeal to Japanese sensibilities and include a wide variety of topics. Manga can encompass just about any genre: science fiction, horror, fantasy, comedy, action, sports, fashion, geared toward young women or men, and even graphic and adult content in some cases.

Hollywood likes comic books, too. In the past 10 years, the box office has been beholden to anything superhero. We've seen wildly successful franchises of Marvel's "Iron Man," "Spiderman," "The X-Men," and D.C. Comic's "Batman," and "The Watchmen." Dark Horse Comics has had success with the "Hellboy" franchise, "300" and "Sin City".

Van Hauten points out that there are plenty of other movies based on comic books that aren't so overtly full of superheroes. "It's astounding, even a movie like Tom Hanks' "Road to Perdition" was a comic graphic novel. Another one is "American Splendor," Harvey Pekar's graphic novel. They're all over the map."

So how does a fan of these movies take the next step and follow their favorite characters on other adventures? Comic books are a great option, said Bell. There's even a phone number to call -- 888-COMIC-BOOK -- to find out the comic shop closest to you. Not to worry, said Bell, it probably won't be like the comic book guy's store from "The Simpsons."

"It's like Cheers in here," said Bell of his store. "It's some place people can come to and hang out and talk about [their favorite comics]. Things they can't get to at home or at work," he said. "The community is growing. A lot of people don't want to admit they like comics."

But Bell said not to hide your pride, because you might be surprised who else reads your favorite title.

We're rallying iReporters at Comic-Con to get the story from the inside out and giving away limited-edition iReport Flip MinoHD video cameras!
The rules for Con costumes

Are you a beginner to Comic-Con? Learn the rules for all the cosplay you'll see and find out the backstory to all those colorful costumes.
Studios build early buzz at Comic-Con

San Diego's convention for comic book fans has evolved into a mammoth, sold-out event where hard-core fans can get early peeks at their favorite movies.
Comic-Con too 'mainstream'?

Some fans say Comic-Con -- the holy four-day weekend for geek culture -- has gone too mainstream. Others see nothing wrong with the trend.
Geek culture news