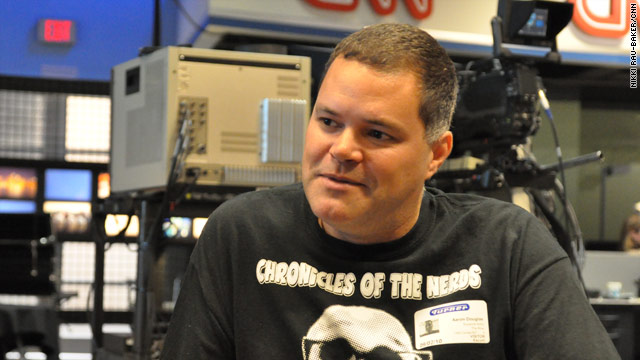 Aaron Douglas: "Mom says that when I was a little kid I always used to say I wanted to be an actor, but I don't remember that."
STORY HIGHLIGHTS

(CNN) -- Aaron Douglas, better known as "Chief Tyrol" on "Battlestar Galactica," is a Dragon*Con veteran. Well known for being open with fans and the life of the Dragon*Con party, Douglas made a pit-stop at CNN to answer some of our BSG-fan questions.

CNN: Had you seen the original BSG before taking the role?

Aaron Douglas: Absolutely, I grew up on the original BSG, I grew up on "Star Wars." The great thing about "Battlestar" was that it was basically "Star Wars" but once a week, as opposed to waiting for three years for the movie to come out. I was a huge "Battlestar" fan.

CNN: Tell us about when you first auditioned for "Battlestar Galactica" -- was it for the part of Capt. Tyrol?

Douglas: No, no I originally auditioned for the part of Apollo (Capt. Lee Adama) which Jamie Bamber got, which is good because Bamber has to go to the gym and I never did. That was good for me. And my callback was for [the role of] Lt. Gaeta, which went to Alessandro, who's great. He's a great actor and he can do the tech talk really well. When they got to the end of the casting there was just no one for the Chief, this Tyrol character that they had left, and David Eick [one of the creators of the show] said, "Why don't we get Aaron to do this?" because David had seen my auditions and quite liked me. So, they offered me this and it grew into what it was.

CNN: At what point did you find out that your character was a Cylon? [a robot]

Douglas: Officially, the day before we started shooting it. But we shot that scene in December, and I had seen some papers that I wasn't supposed to see over at [director] Michael Rymer's house, in September. So I had to sit very quietly for three months, not say a word, furious the whole time. And constantly walking past Ron Moore and David Eick, who are the creators of the show, and say, "So, anything coming up for the Chief?" And they'd say, "Oh no, just fixing vipers, just the usual." Just lying to me! So we finally found out officially and I got Ron [Moore] on the phone, yelled at him for five minutes and then he talked me off the ledge and convinced me that it was a good thing, and he was right.

CNN: Did you suspect that you might be one of the Cylons?

Douglas: God, no. Absolutely not. I thought that the great thing about the Tyrol character is he's such a human, and I guess if they want to humanize the Cylons there's no better character to do it than him and Col. Tigh, but I did not see it coming. I thought it was going to be new people revealed, I didn't think that it was going to be cast revealed to be.

CNN: Did you draw inspiration for your own character from having watched the original BSG?

Douglas: No, my character wasn't in the original BSG, and I don't really know how I do what I do. I literally, I just show up and I say the words as simply as I can. I have a new show now called "The Bridge," where I play a guy who's a real-life guy. My character's based on the life of a guy named Craig Bromell who was a cop for 12 years and then became head of the police association, so basically the president of the union for 85,000 cops. It was the decision to either play it like him or just play it as I see it, so I just play stuff as I see it.

CNN: What were your thoughts about the ending of BSG?

Douglas: I loved it. Other than, what the hell was Starbuck? I still don't know what Starbuck was. But I loved the ending, I thought it was a brilliant piece of writing, certainly Ron's opus. There was no better way to end it. And I love the fact that the Chief just walks off and goes up to Scotland and lives alone. Yep, makes whiskey and builds castles and herds sheep. Yeah.

CNN: Was "The Bridge" your next project, then?

Douglas: I literally wrapped the last day of Battlestar, I wrapped at 5 a.m. on Friday and on Monday I was on a plane to Toronto to start the new show. So, yeah, there wasn't much of a break.

CNN: How would you compare the character you're playing now to Chief Tyrol?

Douglas: You know, they're very similar guys. They're both blue-collar guys, they're both in charge of a group of people that they are fiercely loyal to, they will do whatever it takes to get the right thing done, they're both very flawed, which makes them interesting to watch and interesting to play, they're two guys that you could definitely go to a ball game and have a beer and make fun of people around you.

CNN: How did you get into acting in the first place?

Douglas: My mom says that when I was a little kid I always used to say I wanted to be an actor, but I don't remember that. I remember in high school thinking that I wanted to be a lawyer, and now I realize I saw that movie "And Justice for All" when I was a kid and thought, "That's what lawyers do, and I want to get up and yell and scream in the middle of a courtroom." I want to be a lawyer on TV is what I finally figured out. I fell into it late. I think I was 27 or 28. I was working with a sports nutrition company doing diets for athletes and I met a guy who was working on his nutrition and he was an actor. I eventually quit my job and went back to theater school and that was it, the rest is history.

CNN: Besides acting, what are your hobbies?

Douglas: Sitting quietly and reading a book. I play hockey, I'm a goalie, so people fire pucks at me. And I like to golf and I travel, I travel a lot. But mostly I'm a pretty quiet guy. I just kind of go home and hide away.

CNN: I see you're wearing a shirt that says "Chronicles of the Nerds."

Douglas: "Chronicles of the Nerds," yeah! These are some friends of mine from Oregon that have a website, chroniclesofthenerds.com. I have literally almost 400 T-shirts, because everywhere I go the fans know I like T-shirts. So they're constantly giving me T-shirts. So, any time I get a chance to plug one of my friends or plug a band or something like that, I like to wear their shirts. And the fans think it's really cool. So when I'm at ComicCon or Dragon*Con I'll switch shirts throughout the day, so people get pictures.

CNN: You were at Dragon*Con last year, right?

Douglas: I've been at Dragon*Con, I think five of the last six years. I love coming here. It's unbelievable fun. Last year I came as a fan. I snuck in. I didn't do any panels except for the one that I crashed. I didn't sign or do anything, I just wanted to experience it from the fan's point of view, and it was really, really cool. I come here with, literally, like 25 friends and we take over an entire floor of the hotel and we just have a blast, it's a great place. It's like Vegas without the gambling.

Douglas: The best times are usually in one of our rooms, where we're all just sitting around having a drink and just laughing our faces off. It's just hilarity for four or five days. It's just hanging out with friends. I travel so much and I work so much and we're all from such disparate parts of the country in different jobs. It's hard for us all to get in the same place at the same time and Dragon*Con creates a good venue for that.

CNN: Anything you want to say to your fans?

Douglas: Everybody, go to CNN.com every day! Every, frackin day!