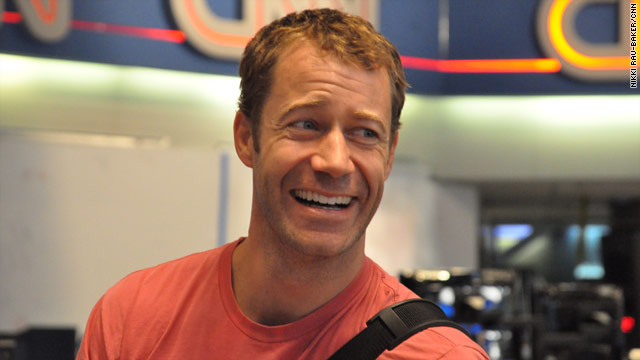 (CNN) -- Colin Ferguson and the Syfy channel have built a loyal following for the show "Eureka," now in its fourth season. The series' titular, top-secret town is filled with uber-geniuses and one wily sheriff, which turns out to be a great mix for science fiction. Ferguson is in Atlanta, Georgia, to promote "Eureka" at Dragon*Con, and stopped by CNN studios to answer a few of our fan-centric questions.

CNN: Sheriff Carter (your character on "Eureka") is a very ingenious guy in a town populated by geniuses. What does Carter have that allows him to be able to figure out solutions that the others might not think of?

Colin Ferguson: I think they don't see the forest for the trees and he's not compromised by not being able to see the forest, so he just sees trees.

Ferguson: Yes, absolutely, well being in CNN right now, I'm jonesing to live at the epicenter of something.

CNN: Do you think companies like Global Dynamics really exist?

Ferguson: Yes -- a friend of mine wrote a book about one.

CNN: Why does Sheriff Carter's car always get destroyed and why doesn't he have a cool Subaru like Deputy Lupo and Fargo?

Ferguson: Tell me about it. They discovered first season that they like hurting me, so whether it's a set of stairs I have to fall down or driving into a post, anything that has to do with me has to be destroyed.

The Subaru ad placement people are on set and we were doing this big stunt and they dropped the tree at the wrong time and the tree slammed the Subaru, and the ad people said, "That wasn't supposed to happen, was it?"

CNN: How do you feel about the rivalry between yourself and Dr. Grant for the affections of Allison?

Ferguson: I was concerned that it was gonna be a really forced triangle, but they managed to make it an adult exchange where we could put it on the table and discuss it and I like it.

CNN: You've also done some directing and camera work. Which do you prefer?

Ferguson: Being the lead of the show is more difficult, it's harder on my body, it's more strenuous, it's harder on my mind but it's rewarding in a day to day manner, but what I love about being the director is you get to protect the story for longer, so you can take all these talents you know, all the people you work with and you get to make sure they get to do all they can do. I love them both. Directing is -- it's easier to act in something that you have questions about than it is to direct something. Directing is so much work for such a long period of time.

CNN: We took a look at your IMDb.com page. Canada has a "Duck, duck, goose" competition and you're the reigning champion?

Ferguson: That's a lie that somebody put on the IMDb website.

CNN: You are a founding member of Detroit, Michigan's Second City improv comedy club. Do you still get the chance to do improv or does the show and movies take up your time now?

Ferguson: I improvise on a regular basis on the show, so I get to do it in that format. As for stage stuff, I'm rusty compared to what I used to be, so I don't do it all that often, although Second City celebrated its 50th anniversary in December and I went back for that.