Conventions: Another day at the office for celebs 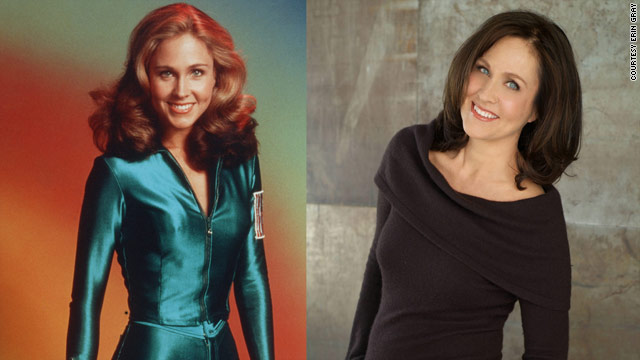 Erin Gray in the uniform that made her a celebrity, left, and today as a celebrity handler.
STORY HIGHLIGHTS

Atlanta, Georgia (CNN) -- Much of the world got to know her as Col. Wilma Deering on the "Buck Rogers in the 25th Century" television series. Though she later played Kate on "Silver Spoons," there was something about that Spandex that was hard to forget.

But today, actress Erin Gray has found a way to combine her celebrity with the very real business of fan-based conventions. At events like Dragon*Con in Atlanta, the woman known for playing strong female characters now uses her brains to wrangle issues for her celebrity clients as they prepare for close encounters with fans.

Gray runs a company called Heroes for Hire, which represents about 35 celebrity clients at conventions around the world. CNN caught up with her at Dragon*Con in Atlanta (unofficially referred to as "PartyCon"). Dragon*Con is known for being the most "fan-friendly" convention, which, in itself, can pose both unique opportunities and unique challenges.

Heading into the weekend, there were 35,000 people expected to attend, primarily to see some of the 400 celebrity guests who sign autographs and mingle with the crowds. Gray knew this meant that there were a lot of things to plan for.

"We create 30-page spreadsheets so that we can keep track of where we are in the process," Gray said. "Are the contracts signed? Have the photos and bios been sent? Are the travel details done?"

Today, the former space colonel walks a fine line between getting her clients closer to their fans at conventions and keeping them away. "We've had death threats before," she said.

"I've had my own personal stalker. I would get nude drawings of my body with a knife and a message saying 'I'm watching you' and 'I'm going to get you.' When you have a baby, you just feel so vulnerable. We couldn't figure it out because it was happening at the studio," Gray said. Incidentally, it turned out to be a security guard.

"The other one, I would get these 10-page tiny handwritten letters front and back and perfect penmanship, and he would say things like 'don't tell your husband about our relationship.' And you know how I found out who it was? He said, 'when you waved at me.' I waved to my postman. This is before we had stalking laws. And when something like that happens, you think, 'is being an actress worth it?' "

Luckily, Gray doesn't have those terrifying experiences anymore, but now she has clients who do.

"I have a couple of clients who give me the names of their stalkers, and I have to let the promoter know who they are and to keep an eye out for them. I have one who is obsessed with a female celebrity, and this guy e-mails me, texts me, and he'll come to a show and stand about 20 feet away and stare at her. We'll hire security, and they will be with security all day long," Gray said. "Every actor has their stalker."

But the reality is that conventions like Dragon*Con can help make or break an actor's career. We are no longer living in the age of Hollywood executives determining who the stars will be, Gray said. We are living in an age of social media, where the fans have a louder voice than ever before.

For example, Gray has one client whom Hollywood paid no attention to. So she went out on her own and started a webcast, and today has more than 1.7 million followers on Twitter. Ouch! That's gotta hurt all of those people who told Felicia Day, "don't call us; we'll call you."

"I think there's been a major shift in grass roots media because of the internet and because the geeks and nerds rule the world. They are in control in so many ways. The comic is today's Western, so many movies, and I think that if actors want to optimize their longevity, it's important for them to meet the fans because those fans are so loyal and will show up at any movie or tune in to any television show they're on," Gray said.

The shift in Gray's own career from onscreen heartthrob to celebrity manager was completely unscripted.

"As an actress reaching her mid- to late 40s and the number of roles not being there and still having kids in private schools, there came a point when I hit bottom, and I was desperate to get a job and understand that being a model and actress my entire life since the age of 15, I didn't have the qualifications to get a normal job, nor did I want to. I couldn't see myself in a corporate environment under the thumb of some boss," she said.

So she started talking to other female actresses in her position, and before long, they were telling her how she could make money at conventions like these.

"I went online and started booking myself, and one day Gil Gerard called me up and said, 'what are you doing?' and I told him I was going to a show in Ohio, and he said, "Oh, I want to go, book me, and I'll pay you 10 percent." Then Gil went and played golf with Marc Singer, and there you have it, a business was born."

Incidentally, both Gerard and Singer made appearances at Dragon*Con this year, along with a host of Gray's other clients.

"Dragon*Con is the number one, in my opinion, fan-based show in the world. The entire focus is on the fans for the fans to have a good time, to satisfy their desires and needs and so on."

Thus the art of managing a celebrity. Gray says she goes to about one con a month, sometimes more. Get the spreadsheets ready.