'Futurama' geeks out with Geek Out! 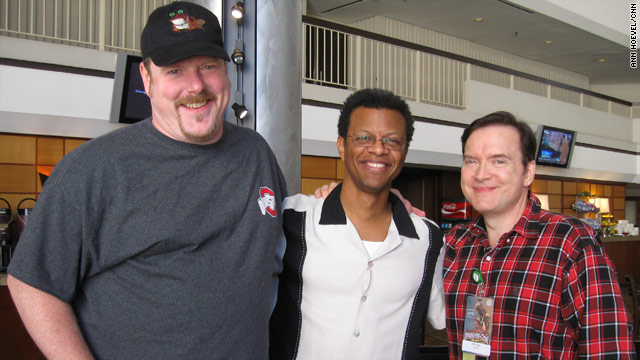 Atlanta, Georgia (CNN) -- In Atlanta for Dragon*Con, part of the voice cast for Matt Groening's animated series "Futurama" sat down with CNN over coffee to answer our fan-oriented questions before heading off to sign autographs for the day.

What happened next was a flurry of hilarious voices from some of the most distinguished voice actors working today. Billy West, John DiMaggio and Phil LaMarr weighed in on everything from which guest stars made them really geek out to the finer points of being a nerd in the year 3000.

Phil LaMarr: No. I'm much, much too lazy. And these people set the bar way, way too high.

John DiMaggio: That's true. The level of depth that they go to, it's crazy. So I have to agree with Phil. Although it would be kind of funny to have somebody build something for you, and then go ahead and do it, and then just be inside the thing and just start talking like Bender and freak people out. Like, "Where'd you get those recordings?"

Billy West: You don't take the job home with you, I don't think. I don't know anyone who...

LaMarr: You don't have a Stimpy costume?

West: [In the voice of Stimpy from "Ren & Stimpy"] Well, that doesn't make me crazy or anything. [In his own voice] No, but I really don't take it home. It's like if you worked in a rock quarry and you brought home boulders with you every night. Yeah, you don't do that.

CNN: John and Phil, you guys have done voice work for some anime, specifically "Afro Samurai" and "Princess Mononoke." How is voicing anime different from voicing American animation?

DiMaggio: I think that's interesting that you bring that up, because normally you record before they animate to your voices. But "Afro Samurai" you guys recorded before, right?

LaMarr: A little bit -- half before, half after.

DiMaggio: OK, because "Princess Mononoke" I had to dub, I had to do the English overdub. And that was kind of hard because you have to match the mouth flaps, you have to do all that kind of stuff. So that's a little difficult.

LaMarr: Yeah, because the timing that you would normally make choices about, as an actor, is controlled by the timing choices that the Japanese actor already made.

DiMaggio: Yeah, so you've got to match these certain moments, which is usually a tough day at the office. I enjoy it, I can do it, but it's still a tough day.

West: Everybody asks, "Do you do the voices first or do you dub them in after the animation?" And you tell them it's always the other way around. But to do it backwards like these guys are talking about, that is a tough day.

DiMaggio: I don't speak Japanese, but you've got to match (unintelligible Japanese) and you're like, OK. And what's the translation? How do you shorten the translation, come up with another way to say the translation -- it's a challenge.

West: Wow, I would say Tate. But he's a cool, cool nerd. The others don't go around explaining stuff all day. The professor does, but he's old, and it's with a wink to everybody.

LaMarr: The professor's not that nerdy. The stuff he's into is very nerdy, but his attitude about it is not nerdy. He's got a very superior attitude. And so does Wernstrom. So Tate might be the nerdiest of that three.

DiMaggio: I would have to vote for Tate.

CNN: Who's the nerdiest of the whole "Futurama" universe?

West: Is it Qbert?

DiMaggio: Yeah, Qbert. I would throw Qbert in there and then I would throw Lrrr. Simply because, "Wha, wha, Joss Whedon's here?!" Just that one line was just like, "Aw, you led us on. We thought you were some tough leader!" And he likes Joss Whedon. And Dwight's pretty nerdy too.

LaMarr: That's true. But he has dreadlocks. That gives him a little cool.

CNN: Can you give us any spoilers for next season?

LaMarr: There is a strong likelihood that there will be an upcoming episode with some math in it. That's all I can say!

West: Oh, tell her the story about the guys that called you up with the body-switching problem that was a real equation.

LaMarr: Yes. A buddy of mine that I went to college with, after the episode aired with the body switching, called me up -- he's a math professor in Pennsylvania -- and he said everyone in his department was really excited to solve the problem.

CNN: And did they?

West and DiMaggio: It's solvable!

West: ["Futurama" writers] are Harvard physicists and MIT grads, and they're comedy writers! So it's not the kind of comedy that's like, "Hey! I got one for ya!" It's like they're so intimidatingly funny in their way that is beyond our level.

DiMaggio: They argue about math jokes for hours.

CNN: Which "Futurama" guest star made each of you really geek out?

LaMarr: Katee Sackhoff. She was recording "Lrreconcilable NdNdifferences," the Comic Con episode. They told me she was coming in, but they also told me I was done. I had also finished my recording. I sat around that recording studio finding phone calls to return and stuff to do for like half an hour before she came in. And then I didn't have the guts to ask for a picture. But I did sneak in and go, "Oh! I think I left my ... Oh, hi! I'm Phil." I at least met her.

West: I was geeking out but in a different kind of way when Pam Anderson was going to come in to play her own head in a jar. So she comes in and it was like the guys with walkie-talkies were saying "OK, Miss Anderson's going into the recording studio now," the door opens and she comes in. She sits down next to me and I couldn't deal with her like she was a human being. She's Pam Anderson! She's a girl floating around in the water that's unbelievably gorgeous. And I said, "I don't know if you know this, but there's this tape going around..." She laughed! She laughed hard!

DiMaggio: I was fortunate enough to be in the studio with three people. Bea Arthur was really cool, because she came in and she was really nervous because she wasn't used to doing voiceover stuff. So they had me in there with her, reading with her when she's the Femputer. And she was really nervous! And I was like, "Miss Arthur, you're really doing great." And she was like [imitating Arthur], "Really? Am I OK?" "Yeah, it's just fine, you're doing just fine." And she immediately proceeded to -- her performance was just like tenfold. And she settled in and she was brilliant.

Sigourney Weaver was awesome, as the Planet Express ship. We were first of all making kissing noises, like with Bea Arthur. I said to Bea Arthur [in the voice of Bender], "Oh yeah, baby, give me some of that!" But Sigourney Weaver was great cause she just came in and nailed it. She was funnier than hell. She was goofy and aloof, she was all over the place.

And then when Beck came. They said, "Action!" And I said [in the voice of Bender], "Oh my God, you're Beck!" And he just started laughing. He couldn't picture that voice coming out of my face so he blew his take. And he was like, "Dude, I'm really sorry I blew the take but that just freaked me out." I said, "Don't worry about it, get into it. Come on, let's go." And we had fun and I got to sing a song with Beck. I had a triple nerd freakout.

CNN: What's the difference between a nerd and a geek in the year 3000?

DiMaggio: I would say they're "gerds." They've been intermarrying for years. Now they're all gerds.

LaMarr: Nerd is an intellectual designation. Geek is a social designation. You can be both and you can be one and not the other. Bubblegum Tate is a nerd but not a geek.

DiMaggio: He's the coolest of the cool.

LaMarr: But the stuff he is into is nerdy. Like if you're into math and you're into comic books, detailed stuff, that's nerdy. Geeky is not about your mental state, it's how you relate to the world. If you can't look a pretty girl in the face, that doesn't mean you're smart. Like, you could be that and dumb. Then you're not a nerd, you're just a geek. And it holds true into the year 3000, except that people have nerd and geek implants.

CNN: How much do those go for?

LaMarr: Oh, it's cheap. Cause it's a continuation of what's happening now. Nerd culture overtook everything except Oprah-ism, so people who were geeks wanted to be nerds and people who were nerds needed to have their geek cred. So you just get a little thing you can stick in the back of your neck.

LaMarr: Is that like smooth jazz? It's a version that's a little easier to take.