"The Guild" and that little WoW addiction 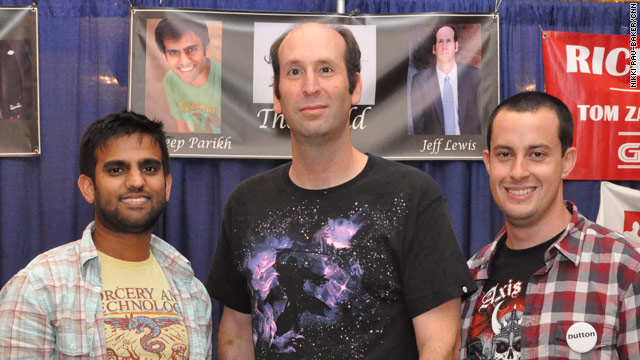 Atlanta, Georgia (CNN) -- Sandeep Parikh, Jeff Lewis and Sean Becker were fresh from their raucous "The Guild" panel at Dragon*Con when they sat down with CNN to answer our fan-oriented questions.

It was their first time at Dragon*Con, and the crowds did not disappoint. One fan in the question line even dressed as Lewis' "Vork" character from the "Game On" video, eight arms and all! Here's what they had to say about "The Guild," gaming and what happens when Felicia Day makes you play "World of Warcraft."

CNN: How psyched were all of you when the "Game On" video bumped Katy Perry off the top of iTunes?

Becker: I screen-grabbed the hell out of that page on iTunes.

Parikh: It's just so cool. We don't have a record label; we don't have anyone besides ourselves, Felicia, Kim, George Ruiz and some other folks that are pushing our show. It's very grass-roots. Microsoft ["The Guild" sponsor] is not like, "here's a budget for marketing." It doesn't really happen. I mean, they do some internal marketing, but ultimately it's up to us to push our own stuff. So, to be in the same breath as, you know, Justin Bieber and all these people and to watch our video climb the charts ...

Becker: We've done the work, and now it's the fans who are deciding and buying. I mean, it happened with "Date My Avatar," too. That was No. 1. We got No. 1 on Pop.

Parikh: We were 2 overall; we couldn't beat Kenny Chesney.

Becker: Who came out with a video the exact same day about football.

Lewis: Nobody can beat him.

Becker: And we put that thing together in like a month total, from writing it to recording it to filming it to editing it. It had to be quick. And it was in the middle of all the season four stuff we were currently doing, too. So it was really ambitious, but I think we're all happy with how it turned out.

CNN: Fans will want to know, what did Zaboo do with the dancers once it was all over?

Parikh: With the hour that I had them for, or the 58 minutes that I had left on the clock? We had some improvs where I was like, "I don't pay them not to dance, DANCE!!" I don't know, I think Zaboo probably just kind of danced around with them, learned more about their history and background, took blood samples and, like, added them to his database.

Parikh: That's what I think Zaboo would do. He's very friendly, so he would want to get to know them. He would just ask very invasive, personal questions.

CNN: Sandeep and Jeff, you both do a very good job portraying very specific types of gamers. How did you research your roles?

Parikh: QQ more nub [which in "World of Warcraft" circles is a way of making fun of new players. The two Qs look like crying eyes.] And for me, I read a lot of fantasy and grew up playing some RPG games and some Ultima and stuff like that. I didn't play WoW specifically. In fact, I specifically stayed away from it because I didn't want the addiction. And someone had already written a funny show about it, so I couldn't turn that addiction into something profitable, like Felicia [Day] did. So I didn't play WoW specifically, but I knew all the terms, roughly what they meant, and Felicia filled us in with stuff we didn't know.

But we all got subscriptions. The president of Blizzard [the game company that distributes "World of Warcraft"] was a fan of the show after the first couple seasons. We got a tour, and everybody there was awesome to us. They were into it and into the show. That was cool. And we all got free subscriptions to play around and got hooked for a little while. I can say that I'm not hooked on WoW anymore. It was intense for about two months, but then the real world came calling. I like to play games that I can beat, that have a beginning, middle and end. So that's what I play these days, mostly XBox stuff.

CNN: So none of you mentioned "Ever-crack."

Parikh: Yeah, I stayed away from "EverQuest" too. We actually appeared in the "EverQuest" documentary called "EverCrack." We shot on set of "The Guild" just a tiny little thing where we're playing hard-core fans with the creators of "EverQuest." But I didn't actually get into that game either. "EverQuest" was really hot during the end of my college years, so I was like trying to get good grades. But if that stuff was out in high school, I would have been toast.

Becker: I have zero keyboard skills. I don't play any computer games. I only play console stuff.

Lewis: I have the keyboard skills, just for playing WoW for a year straight after I got addicted. So, definitely me.

Parikh: I don't know, I played like the old, the "King's Quests" and those games, so my keyboard skills are probably pretty raw. Now, I like playing with my XBox and my Wii. Soon, hopefully, I'll have no controller and be playing with that new thing Microsoft has, Kinect, which would be rad.

Lewis: Yeah, I've been switching over to XBox and DS and PSP

Parikh: See, I feel like I have to segment my life. My computer is for work/stalking my friends on Facebook. And my console is for gaming.

CNN: How do you create buzz for your online series? Now that "The Guild" and "The Legend of Neil" have momentum behind them, is it easier now than it used to be?

Becker: The audience for "The Guild" has continued to grow and grow and grow, but at first it was just a community of gamers. Then it was people outside of gaming. I direct the show, and I don't play "Warcraft." I've never played "Warcraft," and I'm a big fan of the show. I understand the characters and what's going on, and I have a lot of friends who do the exact same. But one thing we've been doing lately are these music videos. When "Do you want to date my avatar" came out, all of a sudden we had a whole new crop of people who saw the video and loved it, but they didn't know that it was part of a show. And then now we've got the "Game On" video, which did the same thing -- people just wanted to watch this fun video, but then it's like, "oh, wait, this is part of a series." Lately, people have been -- even here at Dragon*Con -- people tell me, "Oh, I just got into your show."

Parikh: Whether it's through Netflix or XBox, every new place we distribute we find new fans.

Becker: Actually, the Netflix thing is huge, because people take it more seriously. You may look at it and think, "oh, this is just a Web show," but then you see, "this is a Netflix show," and it's on a DVD.

Parikh: And it holds up. You watch it on your TV, and it's shot very well, it's lit well, and it can look like a TV show, really, or a movie. So keeping the production value very high is important.

Lewis: And we're lucky, too. The next projects we do from this day forward, we can ride the coattails of "The Guild." We have the fanbase, so we can do the online buzz, but we also have the fans from "The Guild" and "Legend of Neil" to take advantage of, too.

CNN: What's the difference between a nerd and a geek?

Lewis: God, that's a good question. I envision this, I don't know if this is right or not, but a nerd to me is a guy who like in high school has pimples and maybe glasses and sort of socially awkward. Whereas a geek to me is anybody who's doing something that's not the general norm.

Becker: Like, a geek embraces it, maybe? I've always thought of nerd as someone who's into nerdy stuff, pop culture stuff like comics. I think a geek is someone who embellishes.

Parikh: For me, I feel like a nerd is more knowledgeable about their geekdom.

Becker: Where a geek is more of a fan, maybe?

Parikh: Yeah, that's it. If you're a nerd, it's because you know something. You're a nerd about that. But if you're a geek about it, that means you just love it.