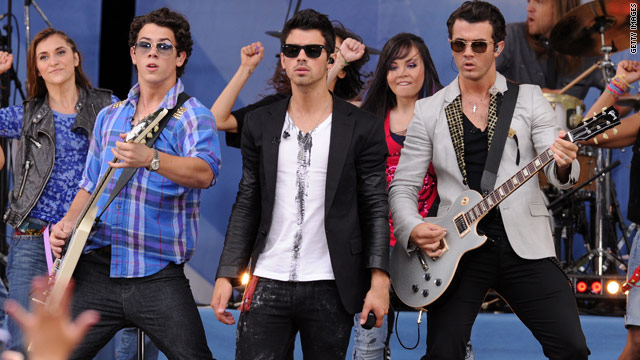 The Jonas Brothers have apologized to their fans in Mexico for their decision to cancel a planned concert.
STORY HIGHLIGHTS
RELATED TOPICS

(CNN) -- The Jonas Brothers have canceled a planned concert in Monterrey, Mexico, they announced Thursday, following an outbreak of drug-related violence there.

The pop trio said they were saddened not to be going through with the show, scheduled for October 21.

"While they wish to apologize to everyone who planned to attend the concert, this difficult decision was made out of their great affection and concern for their loyal fans in the region," their management said in a statement.

The Disney-backed boy band will go ahead with concerts in Guadalajara on October 23 and Mexico City the following day, the statement said.

Monterrey tickets can be exchanged for tickets to those concerts or refunded at the place of purchase.

Moneterrey has seen a wave of violence as rival drug gangs battle each other and the police.

There have been at least three grenade attacks this month.

One was thrown at a police station on October 10, wounding four police officers.

Fourteen people, including eight children, were injured when a grenade was thrown in a public square in front of a city hall on October 3, the state-run Notimex news agency reported, citing local officials.

At least three grenades were thrown in the vicinity of the U.S. consulate in Monterrey late on October 1, a consulate employee told CNN the next morning. The consulate does not appear to have been the target.

A local newspaper reported that a guard at a local courthouse was injured by shrapnel in that incident.

Monterrey is one of Mexico's leading business centers.

It is the capital of the state of Nuevo Leon, which has witnessed much violence as rival drug cartels fight with each other over lucrative smuggling routes and with the federal authorities.