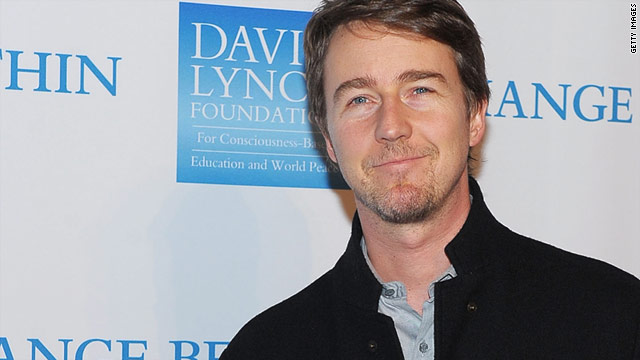 (CNN) -- Actor Edward Norton has been in the spotlight for more than 15 years. But what some fans might not know about him is his work off-camera -- helping raise hundreds of millions of dollars for charitable projects over the course of his career.

For Norton, giving back has always been a passion -- so much so that he recently helped create what he calls the "Facebook of philanthropy."

The website is called "Crowdrise" (www.crowdrise.com) and the goal behind it is to make charitable giving fun. Norton and his friends saw an opportunity to change how people give online.

"We were very frustrated by what we saw out there. Everything out there was just ... we called it 'use and drop,'" Norton said. "It was just a button where you can donate and really nothing more, and we wanted to communicate more than that."

Crowdrise is a fundraising web platform that's also a community.

"This is the platform where you plant a flag and say this is who I am, as defined by what do I care about? What am I passionate about? What causes do I support?" Norton said. "It can be anything. We don't try to suggest to you what you ought to care about. We're just saying, find your own way."

Within minutes, anyone can create a page, start a fundraiser and ask for donations from friends, family and strangers.

"Look, you've got a generation of people coming along who are going to form their own new relationship with the idea of supporting the causes that they care about or changing the world," Norton said. "And these people are not going to do it the way our parents do it."

Norton is mindful to also make Crowdrise fun, adding a gaming aspect to the site. Members can earn points and win prizes.

"If you don't give back, no one will like you. That is our core philosophy. We're a bunch of dorks," Norton said.

The actor has enlisted the help of his famous friends, who are creating profiles on Crowdrise. Will Ferrell, for example, is raising money for cancer survivors.

"You can win a bottle of Will's suntan lotion for a donation to his site," Norton said.

The dream is to revolutionize giving, one web page at a time.

"I think we really feel like Crowdrise could be something that, 20 years from now, people take for granted because that's just how you do it, like if you're going to raise money for something, that's how you do it," Norton said.

"In the beginning, we said this like it was a pipe dream, but now I actually think it's going to happen."