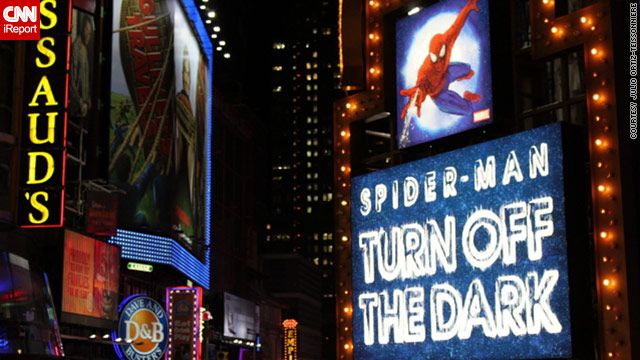 The Broadway musical "Spider-Man: Turn Off the Dark" has been beset by cast injuries and technical problems.
STORY HIGHLIGHTS

New York (CNN) -- The fall that seriously injured an actor in the stage musical "Spider-Man: Turn Off the Dark" was caused by human error, an actors' union said Wednesday.

The "Spider-Man" company met Tuesday with officials from the union, the Actors Equity Association, and members of Occupational Safety and Health Administration and the New York State Department of Labor.

The union said after consulting with OSHA and the labor agency, it concluded that the fall was caused by human error.

The union did not give any details but said it worked with the other agencies to develop a safety plan to address the issue.

Jonathan Dealwis, a tourist from New Zealand who was in the audience, said Tierney fell "about 6 meters," or about 20 feet, Monday night.

Reeve Carney is the actor who plays Spider-Man, but nine people perform Spider-Man's stunts when the character is masked, according to show spokesman Jaron Caldwell.

Dealwis said the accident happened near the end of the show.

"Spider-Man was on a bridge, and Mary Jane was dangling from it," Dealwis said. "I think he was meant to sort of swoop over there, but he just fell off. ... The harness, you could see it just flick off his back and fly backward."

Afterward, Dealwis said, "It just went black, and the producer came on and said we're going to pause for a moment. You could hear Mary Jane weeping."

A producer then came out and said the show was over, Dealwis said.

Dealwis said the performer was wheeled away in a neck brace and was alert when he was taken to Bellevue Hospital.

Rick Miramontez, another show spokesman, issued a statement confirming the performer fell from a platform and the show was stopped.

"All signs were good as he was taken to the hospital for observation," Miramontez said.

Wednesday's matinee performance was postponed after the incident, Miramontez said, but all subsequent performances will proceed as scheduled.

Show director Julie Taymor said the accident was "obviously heartbreaking for our entire team and, of course, to me personally."

"I am so thankful that Chris is going to be all right and is in great spirits," Taymor said in a statement Tuesday. "Nothing is more important than the safety of our 'Spider-Man' family, and we'll continue to do everything in our power to protect the cast and crew."

The show, with music and lyrics by U2's Bono and The Edge, is the most expensive in Broadway history, but the production has been beset by cast injuries and technical problems.